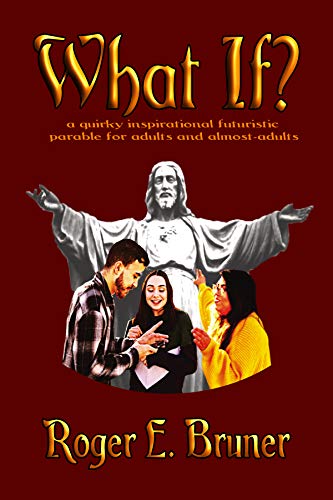 Book: What If? - a quirky inspirational futuristic parable for adults and almost-adults by Roger E. Bruner

about this book: I wrote this book because I believe the Far Left is doing its best to destroy Christianity and take away many of the freedoms Americans so value. But this book is not a novel sermonizing against the Far Left. It's a futuristic look at something that could conceivably happen as the result of voters failing to vote carefully and consistently, and the ultimate message is the importance of conquering the enemies of Christianity by praying for and loving them.

I first got the idea for this book at the time of the 2016 election, but the time wasn't right for actually trying to write and publish it. Four or five months ago I felt inspired to go ahead and write this novel.

As it often happens with my novel writing, I had to pray my way through it day by day to make sure I was writing the story God wanted me to write.

One thing that makes this book different from my others is it is aimed at both adults and mature teens. The three teens depicted on the cover work with their political science teacher to help the outgoing president of Holyland prevent the inevitable election of an evil president who wants only to destroy the inhabitants of Holyland. That can't be accomplished without divine intervention on the part of Jesus.

I had more fun designing the cover. In fact, those teens gave some direction to my depiction of them as protagonists. The statue of Jesus plays a humongous role in the story.

I want this book to say several things to readers (in addition to simply entertaining them). Vote and vote intelligently. Love your enemies, no matter how you hate the way they act. Don't let the easy way lead you down a path God doesn't want you to be taking.