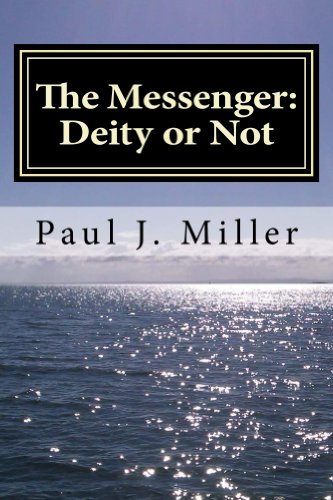 Book: The Messenger - Deity or Not by Paul John Miller

about this book: Paul Miller is a middle aged unemployed man living in South Florida. His inability to find a decent job has hit directly on his marriage and self esteem. In an act of desperation Paul comes up with a scam that even he knows sounds implausible. What would happen if he were to get a message from God? A funny thing happens to him on the way to Colorado to deliver his message. He books a motel room in Denver and in the middle of the night he actually receives a message from God. The next day as Paul goes to a spiritual retreat to deliver his message he catches the attention of a multi-millionaire by the name of Bob Goodman. After he tells the audience that he received a message from God, he is asked to leave the premise. The story should be over at this point, but thanks to modern technology more specifically a cell phone the adventure lives on. This catches the attention of thousands of people which starts the ball rolling. Bob offers his services to Paul to help him organize his mission. One of the first tasks Bob takes on is to put together a staff of people to help run the escapade; the staff would later be referred to as "The Family". Join Paul, Bob and the Family as they go across the country in different venues to deliver God's messages. The story is as much about the relationships that are forged between strangers as it is about the way we live our lives on earth. Oh, I almost forgot to tell you that maybe the most important thing you should do in your life is use your manners when asking for a cup of coffee.