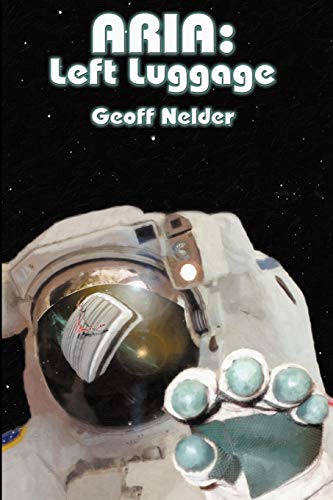 about this book: ARIA is a science fiction trilogy the first of which, Left Luggage was published in August 2012 by LL-Publications.

Riding my racing bicycle up a steep Welsh hill a wayward question inveigled its way into my brain. Suppose amnesia was infectious? I had to stop even though rotating my pedals again on an incline wasn't easy. The ramifications of infectious amnesia was awful – especially if no one was immune and the memory loss was retrograde. Imagine losing, say, a year's worth of memory from now backwards every week. Within a month you have forgotten four years of memory – perhaps in that time you'd moved house, jobs, wives! How long would it take for society to break down? Factories and farms shut down because their workforce forgot what to do, where to go, where they live. Children soon forget how to write, read... and then how to speak. Would they forget what to eat or would instinct take over?

When this event happens in the near future in ARIA, a few realize what's happening and isolate themselves in a remote valley. They are obliged to defend themselves against starving intruders infected with ARIA (Alien Retrograde Infectious Amnesia). Luckily, or not, the crew of the International Space Station have not been infected. They found a case in space and NASA told them to send it to Earth – big bad. Is ARIA really alien, and if so, what was their aim. So many questions but important among them was how people cope, and some do for a long time. They make notes but need to wake up each morning with the most important facts easily available: such as who is this person I woke up next to?

I researched like crazy for 4 months to discover a) there was no known medical event of infectious amnesia, and b) that the concept – especially with retrograde amnesia hadn't been used in published stories, nor on TV or film. It took a year to create the first draft worried someone else would think of it. I showed and discussed it with SF luminaries such as Jon Couternay Grimwood, Charles Stross and US writer, Brad Linaweaver, who all endorsed it. Mike Resnick also found the premise intriguing and liked the accessible writing style.

1. Infectious amnesia is an original concept in that it is an unknown medical condition and has not been used before in novels or films.

2. Research help and support was emailed to Geoff from space! Astronaut Leroy Chiao answered Geoff's questions about the nature of the struts on the International Space Station, and in 2012 wished him luck with the book.

3. All the places on Earth used in the book are real geographical locations, including the 'hidden' valley – Anafon – in North Wales.

4. The cover art is designed by award-winning artist, Andy Bigwood.

5. The idea of infectious amnesia came to Geoff while he was riding a bicycle up a steep Welsh hill.

read about Geoff Nelder on Wikipedia

Left Luggage was voted the best science fiction novel of 2012 at the Preditors & Editors Readers' Poll. It came first out of 85 entries in its category.