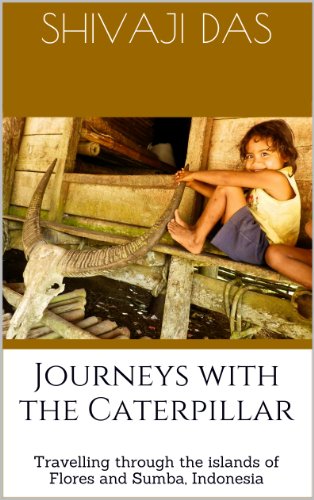 Book: Journeys with the caterpillar - Travelling through the islands of Flores and Sumba, Indonesia by Shivaji Das

about this book: "The crowd lined up along the street, shoulder to shoulder, back to front. Fathers held up their boys over their shoulders. The older children climbed up the trees to have a better view. The pressure of the crowd was building behind me. On the other side, an opening formed in the crowd and about fifteen men assembled around the buffalo tied at the very end. The sacrifices were about to begin. We were in the remote island of Sumba, Indonesia, invited to witness the funeral rites for a hundred year old woman."

Journeys with the caterpillar, is a humble and humorous attempt to capture the dramatic simplicity of Nusa Tenggara Timur(NTT) in Indonesia, covering the islands of Flores, Komodo, Rinca and Sumba.

Here, islands greet the sky with over a dozen volcanoes rising hurriedly from the seas, nestling within them whimsical colour-changing lakes that shelter dead spirits. Along the edges, shores adorn themselves with kaleidoscopic stones and beaches blush from the remains of dead pink corals. Nearby, baby Komodo Dragons scramble for the nearest tree, fleeing from their prowling mothers.

In these islands, people live in small tightly-knit communes, holding on to their ancient cultures. They practice elaborate animist rites for births, weddings, harvests and funerals, and ones' prestige is still measured by how many buffaloes and pigs he sacrifices. Across the islands, one encounters overwhelming humanity that celebrates and greets life with ever-blossoming smiles in the midst of grinding poverty.

All royalties from this book will be donated to Ayo Indonesia and Yayasan Harapan Sumba (YHS), two NGOs doing wonderful work in Flores and Sumba respectively.

http://www.ayo-indonesia.org
Yayasan Harapan Sumba (YHS) is a small charitable organization which works with very poor farming communities on the island of Sumba. YHS addresses their needs for water, education, better health and sustainable livelihoods, and also help some of the disabled children there. YHS helps the communities understand and resolve their own problems through discussions, training and working together, with a minimum of 'handouts'. All of YHS' efforts are geared to helping them to achieve permanent improvements in their lives and those of their children.

Video: Journeys with the caterpilar: Travelling through the islands of Flores and Sumba, Indonesia