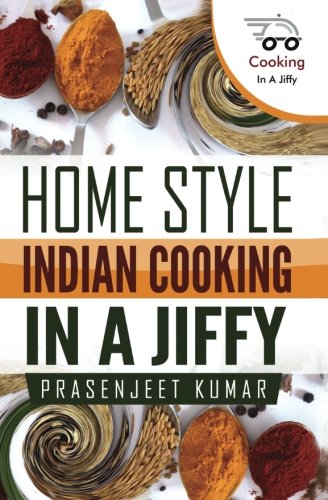 Book: Home Style Indian Cooking In A Jiffy (How To Cook Everything In A Jiffy) (Volume 2) by Prasenjeet Kumar

about this book: How is "Home Style" Indian food different from "restaurant food"?

Many of my international friends are surprised to learn that there is in India a distinct difference between "Home Style" food and "restaurant food".

"So, what do you Indians eat at home?" They will ask me.

Is it all really so different from "restaurant food"?

And, more importantly, is it so superior to "restaurant food" that it deserves to be discussed as a separate category?

I believe that such a "strange" debate among Europeans or Englishmen does not take place in the western world (though I may be wrong!). There you usually look up to the versions created in restaurants and by Michelin Star chefs of say "Roast Turkey" and try to replicate it at home. Here, in India, you almost look down upon the versions of say, "yellow dal" peddled by restaurants and very condescendingly declared your own "Home Style" versions to be less oily or more tasteful and decidedly superior in any case.

I also discovered that certain dishes are just not available in restaurants. For example, I couldn't have my Eastern Indian style Arhar dal anywhere in India including the wayside eateries in Bihar and Uttar Pradesh. Similarly, the Dahi-Sarson (yogurt-mustard) fish, which every Bengali household can probably offer, is unavailable even in 5-star hotels in Delhi. Why, even the simple Indian unleavened bread called Chapati or Phulka, that I eat every day, would be absent from most restaurant menus who prefer to offer Tandoori Roti or Naan instead.

Digging a little deeper, I learnt that the whole style of restaurant cooking in India is diametrically opposed to what we practise in our homes with respect to the same dish. For restaurants, speed is of utmost essence as they don't expect any customer to wait for longer than 15 minutes to be served. So they have to keep ingredients ready in a semi-finished condition for a quick conversion in to whatever dish the customer demands. Chicken, for example, will be semi-cooked in a tandoor and then kept ready to be converted into Butter Chicken or Chicken Tikka or Chicken Do Pyaza (Chicken with two onions literally!) at the drop of a hat. Same goes for the veggies, which will be cut, and even boiled, to be used for any curried or dry version of that vegetable dish. This is the only way for restaurants to come up with menus that contained sometimes as many as 100 dishes.

A dhaba (roadside eatery) doesn't even have that luxury of a lead time of 15 minutes. Their customers being mostly busy (and burly) truck drivers from Punjab don't like to wait even for 5 minutes before being served. So a good dhaba to survive has to cook and keep ready its full repertoire of 10-12 dishes all the while. That way it is quite like the "Home Food" which too is fully finished in one go, starting from scratch. The one big difference, however, is that dhaba food would contain a lot more oil than home cooked meals. This is so because oil acts as some kind of preservative for dhaba food which, unlike home cooked meals, doesn't normally go into a fridge.

It was for this reason, it dawned on me, that even the Indian desserts like Gulab Jamuns or Jalebis served in dhabas would be fried!

The upshot of all this very fascinating debate that we carried over many, many moons was the conclusion that there is still a very robust tradition of "Home Style" cuisine alive and kicking in India. And this was very different from Indian restaurant cooking because:

One, it was cooked from scratch, from fresh ingredients;

Two, many "Home Style" dishes were simply NOT available on restaurant menus;

Three, it was much healthier as it allowed full freedom to change your salt, sugar and spice levels;

Four, it was not only less oily but it also permitted you to choose your preferred oil (mustard, olive, coconut, ground nut, soya, sunflower, rice bran or whatever…); and above all,

Five, it was less complicated and, therefore, easier to cook.

For me, and for all my colleagues in India, who just couldn't turn into professional chefs overnight, the last point was an eye opener.

"Is that so?" many asked incredulously.

"Prove it, Prasenjeet"; someone threw a challenge.

So I picked up the gauntlet and ventured out to start with a catalogue of my own family's "Home Style" Indian cuisine.

And this Book is the result of that small, modest attempt to do that.