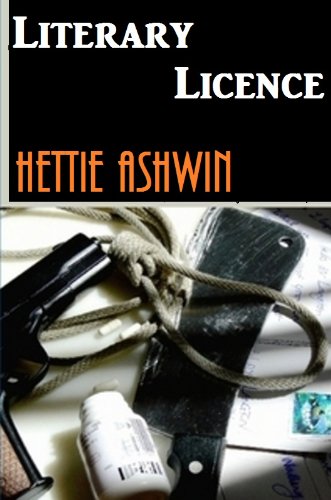 about this book: Ursula Drewsbury is a famous mystery writer. She has been writing for years and now feels it is time to retire and do all those 'when I retire jobs.'

Her agent Trevor Millspeed is a little put out by her decision as she is his bread and butter, but Ursula has made up her mind. But it only takes 6 months and Ursula is bored. She feels neglected by the media and her ego is suffering. Then a report in a newspaper accuses her of being a hack and only trading on her name and not her talent.

While cleaning out her sideboard she finds an old story and to show the newspaper she has talent she tidies up the story and then decides to submit it under a pseudonym, Lloyd Langton. Ursula concocts a full life history for Lloyd and decides he is gay. His book eventually becomes a hit and the ol' Drewsbury magic has done it again.

Trevor who is gay, wants to be Lloyd's agent and his love interest. If he can score a big author then he will be assured a partnership in his firm.

Lloyd Langton has become the man of the hour and his popularity is eclipsing Ursula's.

The paparazzi are in attendance, making life difficult for Ursula as she tries to manage Lloyd's affairs so she decides to get rid of him. Her postman Victor Budinski who worships her, arranges a holiday retreat on Fitton Lake in a houseboat for Ursula and Lloyd.

The scene is set for a tragic accident but unbeknown to Ursula Mr. Percy Hickey of the daily chronicle newspaper has been following the rise and demise of Lloyd and smells something fishy. He follows Ursula to the lake and witnesses what he thinks is a murder. It is only when he retrieves the 'body in the bag' from the lake and sees Lloyd is a brick that he knows for sure Ursula is faking it.

With this knowledge Percy plants the seeds of a big reward for the discovery of Lloyd (who supposedly has slipped and drowned in Fitton Lake) to his editor Mr. Fisher. Mr. Fisher posts a large reward trusting Fitton lake to keep Lloyd from reappearing while doubling his circulation. He is sure the newspapers money is safe. Now with money on offer Percy finds Lloyd who is in reality his friend from his prison days, Marion Goodbody and hopes to collect the money.

Ursula is trapped. She cannot reveal the impostor because her credibility would be dashed and so has to play along with the scenario. Lloyd (Marion) is courted by Trevor and keeps having to run away from his advances, not realizing Lloyd is supposed to be gay. His escape from death is big news and he is to appear on the most popular talk show as Percy is to get the cheque from the newspaper for discovering him.

All the players are assembled at the Brian Osman show studio and just as the money is to be handed over a policeman recognises Marion and the whole show is turned into slapstick.

A cinema director Derek Byrd, finds the story of Lloyd's disappearance a good idea for a movie and as he is in his experimental phase will have all the players play themselves.

The movie becomes a success and everyone's aspirations are fulfilled. Ursula is in the papers again, Victor is in her affections, and Marion and Percy are in the money. Trevor is made a partner of his firm, Mr. Fisher saved the newspaper from handing over the cheque and gives himself a bonus.

Humour is one of the hardest things to get right. Literary licence contains a bit of slapstick, word play and humorous similes. An original word (made up) in the novel won a prize in the Collins Dictionary hunt for new words.

• Review: "Literary Licence is a great read, good plot, humorous and wonderfully descriptive. You can visualise each funny situation and find yourself laughing out loud."