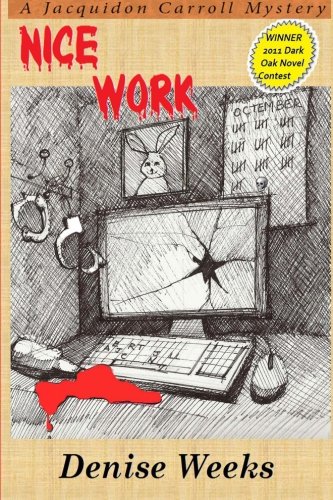 about this book: In this economy, just about everyone has been downsized out of a job. Many people might even find that they've been asked to train their replacements (with the job title slightly altered so as not to alert anyone that this is your replacement, of course!) But most f the time, after you're downsized, you don't wake up the next morning to find yourself accused of your boss's murder.

Imagine how rough it was on me as the author when I was doing research about this alternative lifestyle. . . . It's all played for laughs, not explicit at all, and seen through the eyes of an innocent twentysomething and her younger sister. But with the popularity of those SHADES OF GRAY, perhaps this story will piggyback for fans of that series as well. Who can say?

Readers say that the best part about this book is experiencing the great relationship between sisters Jacquidon (named after a childhood friend of mine) and Chantal Carroll and chuckling at their banter and their antics. I only know that I enjoyed everything about writing the book. As I said, the research was a bit daunting at times, but the people I contacted were very kind about educating me and explaining the perks and problems of their lifestyle choice. They were just as normal as the rest of us (but I haven't met anyone "normal" ever at all, and what IS "normal," anyway?) It would be a big joke on me if they were making the entire thing up. I hope they weren't! (I'm fairly sure they weren't!)

The cover of NICE WORK was drawn by my cousin, who is an award-winning architect and artist. If you read the novel, you'll see the references and the clues that are in the sketch. But I just like the sketch so much that even if you don't read the book, you should take a look. It's more like the covers of older novels and not so much "stock" the way so many covers are now. Notice the happy bunny on the wall and the name of the month on the calendar!

I'd like to ask my readers to give longer novels a chance. This is a fairly long book. Not quite as long as Stephen King's reissue of the un-edited version of THE STAND, but a little longer than the usual genre mystery. I like to think that in this one, I transcend genre and raise a few questions about identity and what it really is . . . raise a few philosophical questions about life and death and the Universe and everything, things that can't be answered with a simple and flippant "42." I explore the nature of trust and why we should trust others--but also take those intuitions we have very seriously and never tamp them down as "paranoia," for even a paranoid may have people who are out to get her. I hope the book raises a few questions in the reader's mind and makes him or her think seriously about the role of identity and roleplaying and the "masks" we all wear and the true faces beneath them. But of course my main purpose is to entertain, and if I have done that, and have made at least a few readers love my quirky characters and their family and friends, I can fly the "Mission Accomplished" banner and be happy.