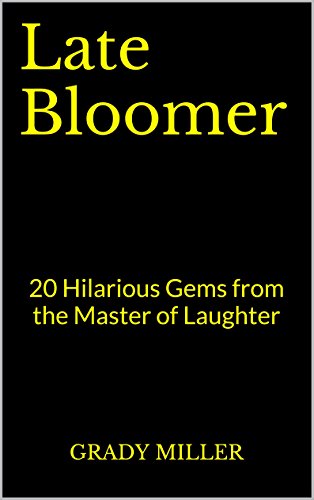 about this book: I have a very soft spot for "Late Bloomer." This collection of zany essays and Hollywood-centric nonsense marks the place in my life when I met comedy or comedy met me. And it has been an amazing, magical journey, opening doors I would never imagined, and offering healing laughter — for myself and others. This all started with a random job offer to write for something the producers described as "Simpson's in Spanish." The job didn't pan out, but I had found something that captivated me, devising sketches around the lives of cartoon characters. And in my native English I began writing what I call cartoons with words.

My story "The Silence of the Muse," the saga of a hapless poet and a lifetime of rejection slips was in internet sensation in the fall of 2004. The morning it came out, I ran into the bedroom and told my still-sleeping wife, "They know about me in Sweden, in Brazil and Minnesota." She yawned and went back to sleep.

My humor column in the Canyon-News was soon off and running. Though not everyone knew it was humor. My first fan mail was from an outraged environmentalist from West Hollywood who didn't realize that my advocacy of a "single garbage can for everything" was a mockery of the city's byzantine recycling system. I was later pleased to learn that the sanitation department in the city hall had my article pinned on the wall.

That piece, "The Garbageman Cometh" somehow got misplaced, but you'll find plenty in these pages to ruffle your feathers and tickle your funnybone.

— Romance smolders between Reagan and Thatcher,
— Bob Hope entertains the troops in Iraq,
— An overstuffed Hollywood chair tells all
— Pet horoscopes
— Modern man's search for a parking place
— A cheat sheet on making is big in Hollywood... And much more.

"A wryly observed satire of Hollywood mores," wrote TV comedy writer Stu Silverman. Like DeToqueville on laughing gas, it's a gas-guzzler of a comedy, as rollicking a ride as the 405."

T.C. Boyle raved, well he didn't rave, exactly, as critics are supposed to do. He spoke rather gently and said, "Too much shtick."
And I replied, "I shall continue to speak softly and carry a big shtick."