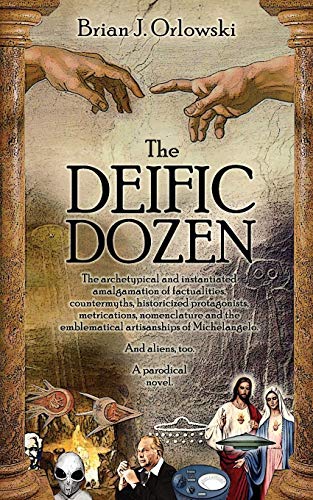 about this book: It has long been suspected that aliens have watched over us, interacted with us, and even tinkered with our nether regions. But until now, no one was brave enough to bring forth the truth about the connection between modern religion and aliens from another galaxy! Was Jesus given secret information from travelers from outer space? Were most of the major discoveries throughout history, like the recipe for KFC chicken, provided by spacemen? Who are the Twelvists and what is this secret society hiding? Why are Scientologists so nutty? All these questions are almost answered and semi-logically explained in an enlightening, thrilling, and comedic journey anyone with half a brain should read.

The ground-breaking, earth-shattering, belly-laughing, overly-hyphenated novel is finally here. The Deific Dozen is a madman's answer to the Da Vinci Code. A raucous romp of research and ridiculousness. And alliteration.

Did aliens help mankind and create modern religion? Are the answers to the universe protected by a secret society devoted to the number 12? Do ancient paintings and the works of Michelangelo contain clues to this secret code? Did some of the greatest inventions and discoveries by humans come from an other-worldy source? Are Scientologists just plain crazy? Why so many darn questions?