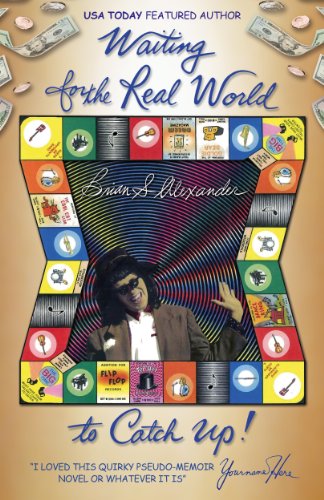 Book: Waiting for the Real World to Catch Up by Brian S. Alexander

about this book: "Waiting for the Real World to catch Up" is the story of Scottrick, a crazed inventor, who was always chasing rainbows. He dreamed of having a million dollar idea and when he finally gets one, it's snatched away by greedy and jealous co-workers. Burned by his experience with corporate America, he stumbles through a series of misadventures including making a wacky record album and trying to be a truck driver and is finally reduced to working alongside actress wannabe Tina Fey at the YMCA. Her success inspires him to write a book in the obscure field of kitchen collectibles which nets him fifteen seconds of fame. Desperate to extend it, he compulsively tries out for the game show "Who Wants to be a Millionaire" with hilarious results. Scottrick's story is a quest for the great American dream with all the bumps and detours along the way. It includes 160 over-the-top pictures, celebrity cameos by Tina Fey, Meredith Vieira, Martha Stewart, and others, 47 interactive song and video clips on Youtube, and other surprises!

The book was started in September of 2006 when eBooks were just wishful thinking, and went through numerous revisions, edits, and workshops before reaching its present length of 87,500 words. It was released as a fully interactive eBook for the kindle in June 2013, with iPad, Nook and other formats to follow.