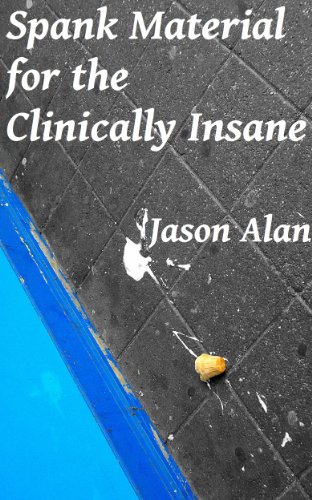 Book: Spank Material for the Clinically Insane by Jason Alan

about this book: This is a book of over 2,200 tweet-sized jokes (how do I know? because I tweeted them) collected over two years. It is blatantly and unabashedly offensive, and it's meant to be that way. It's comedy at its worst, and some would say its finest. Who these some people are, I have no idea. I'm sure there are mental patients that would say it, before having taken their meds. I, as the author, strongly advise that you do not read this. That's not a half-hearted attempt at reverse psychology, either. You shouldn't read it, but you should download it, share it, like it and review it. It's easy to review without having read it. It's a bunch of insensitive tweets with commentary (mostly at the beginning of each chapter).

Go rate it, even if it's only 1 star and go review it, even if just reading one sentence of it makes you want to blow chunks. Sure, it's lying to review a book you've never read, but big deal. There are people raping and murdering right now (maybe even pillaging, too), as you read this. Lying is like nothing compared to that. In fact, some might even say that writing a review for my book would actually prevent a rape or a murder, if only for the amount of time it took to write it. That's probably enough, right? I mean, I bet some authors just phone it in when it comes to this box. They probably include positive reviews (mine has three reviews so far, all 5 stars, not that I'm bragging), some cookie-cutter bullshit about their stupid tome, and an attempt to kiss the readers' ass. Well fuck that. I'm not typing in this thing anymore. Really. I'm done typing. Seriously.