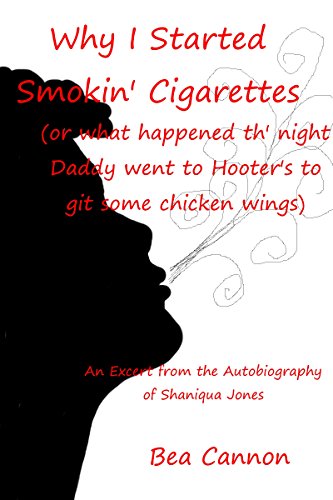 Book: Why I Started Smokin' Cigarettes by Bea Cannon

about this book: Shaniqua Jones smokes like it's going out of style. One day a friend of hers asks her why she smokes so much.

Her explanation is so convoluted that the friend tells her to write it down which led to Shaniqua giving this account. In fact, it led to Shaniqua deciding she wants to tell the entire story of her life.

Or at least she's trying to - it's taking a while.

It is, in fact taking so long that Shaniqua has decided she'll just write down certain events whenever she thinks of them instead of trying to write the whole thing at once, because, as she says, "My life's been full of a lotta s***t, and if I try to write it all at once it'll never git done. I'ma ha' to do it a l'il bit at a time."

Suffice it to say that Shaniqua was (and still is) quite a character, and there will soon be additions to her story.

Meanwhile, this is her account of when and why she started smoking cigarettes.