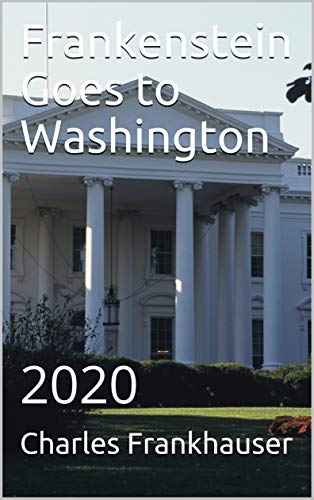 about this book: The Frankenstein family relocated from Europe to a castle in Peru after WWII. Young Max von Frankenstein memorized account numbers for offshore bank deposits that held the family's fortune. After Max was unable to recall account numbers, he was banished from the castle to New York City where he lived in a penthouse condo overlooking the city. Servants at the castle in Peru had rap sheets from involvements in crime. Max took Slick Sam, known as Scam Man, along to NYC to manage a campaign for POTUS in the 2020 elections. The castle's doctor in Europe assembled Max from body parts; a bolt of lightning got Max's brain working. Max had an early model download of Artificial Intelligence (AI) brain algorithms. A reporter from the Fake News interviews Max and his campaign manager at a trendy Georgetown watering hole, and members of a Press Club ask questions about campaign issues after a luncheon. Problems for Max's campaign continue to accumulate. Can computer geeks at a gaming conference save the day? Could Max be elected as POTUS in the 2020 elections? Research reveals that the monster in the novel Mary Shelley published more than a hundred years ago (now in public domain re copyright) has a character named only as "monster." The doctor that created the monster was named Victor Frankenstein. The presidential campaign issues that face Max von Frankenstein are derived from viewing TV news shows over an extended period of time. Artificial Intelligence applications are being developed worldwide. How might AI applications affect Max von Frankenstein in the 2020 elections?