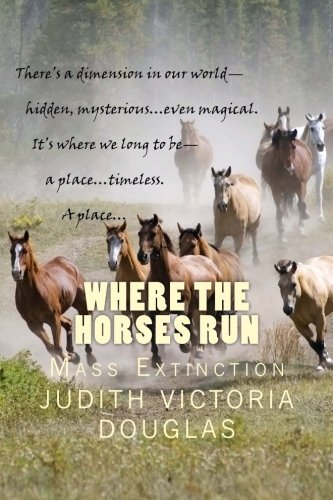 Book: Where the Horses Run, Book I - Mass Extinction by Judith Victoria Douglas

about this book: This epic tale begins with Elle's disrupted plans. She's attending a Dressage horse show for the first time in four year, since the vehicular accident which caused the death of her champion hopeful. The mass disappearance of all the horses around her, except those being ridden, causes her to recall her past traumas and affects her response to the mass loss of a beloved species.

Many lost memories return along her road to this juncture: her heartache for the losses she's suffered, the fear and pain she endured after her breakdown and during her recovery, the anger she's held on to for those causing it, especially those memories she still can't find. Broken by that previous tragedy, followed by a risky recovery treatment, her traumatic experiences mingle with her shock after witnessing the unbelievable. She's barely healed after the tragic loss of Le Roi du Soleil, her vibrant, young stallion, and now grateful her giant black gelding, Goliath, isn't among those vanished.

Her journey begins as her past soon catches up in many unexpected ways--she sees someone she should know, but can't remember, and has her first daytime vision, causing her to question her own mind. Placed back on her unfinished path, her dream-visions continue to reveal a forgotten Native American connection as more people begin hearing the thunder of running horses and the lone whinny calling their name. She's left an eagle feather as the proof she needs to believe. And she feels this connection is helping her prepare to endure her greatest fear -- the memory of the screams she heard in the dark that sent her over the edge, to a hospital and painful electroconvulsive shock treatments.

Many Lakhóta (Sioux)visionaries from the past guide Elle and her guardian, Tommy, with many others drawn to join her quest as events unfold. They discover clues to a scientific phenomenon hidden on the Earth as they search for meaning in this big mystery. There is an artifact, a gray stone with a black heart, which must be found. And "Little Gold Star" is important.

It's difficult to realize the horses will never return until they accept their horses knew what they did not--a change will effect Mother Earth and all living upon her. Will it be an awakening or a catastrophe, or both?

Follow the story with the second book, Sacred Hills, to learn more. Due out later this year. Kindle for book one will be released when book 2 is published.