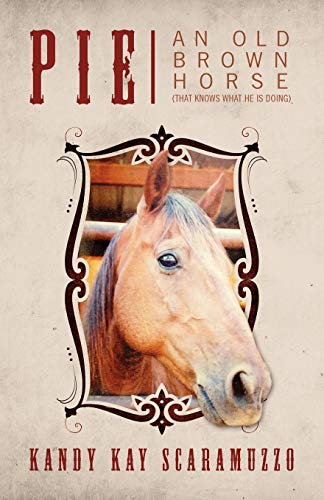 Book: Pie - An Old Brown Horse (That Knows What He Is Doing) by Kandy Kay Scaramuzzo

about this book: This book was written about an exceptional horse. After spending many years working with students and critters with issues, when one came along with a special light, he was quite easy to identify. This horse has helped so many people in the short thirteen years we have had him. It is an interesting story of how he was injured and pretty much thrown away and made a comeback as a merchant of hope. This is a book anyone can read and enjoy. The story is told in Pie's voice. He is quite the character. His comments and perceptions are most original. I felt this story needed to be written because it is actually a great story of redemption and support. It is a feel good story and everyone knows there are never enough of those around. The best part is Pie is still with us. He is now a snappy thirty eight year old gentleman.

I chose this cover because it is a picture of the real horse. His face has such character and class. You can't look at the picture and not pick up the book. Pie has been a great influence on many people and apparently his book is carrying on his legacy without a lot of effort on his part. He is an unforgettable character that has made his place in this world as a merchant of hope.

It has gotten rave reviews. Kristy Turnbow says: "... I like that it leaves you with a feel good feeling ... It is very hard to find a book that does not include lots of violence and negativity that goes along with today's lives." J. Warren agrees: "wonderful book! I highly recommended it to my family and friends."

I knew this was a story that needed to be told, but after I wrote it, I realized I was the lucky one to have been charged to spread this tale of hope and joy. It is a nice easy read with lots of pictures of the players. I truly think anyone who reads this will leave it with a smile on their face.