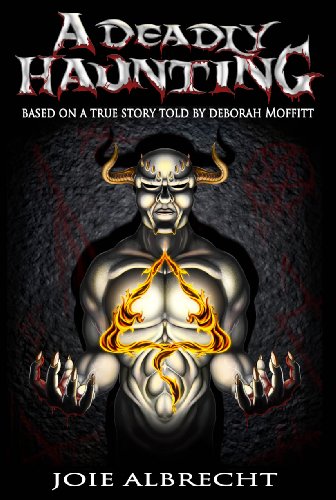 Book: A Deadly Haunting - Based a True Story told by Deborah Moffitt by Joie Albrecht

about this book: Drawing upon a true story told by Deborah Moffitt, Joie Albrecht helps to usher forth the truth of a long-guarded family secret: a terrifying haunting that has been hidden for over 25 years. A Deadly Haunting dares us to relive the horror of the Moffitt family's nightmarish struggles against a demonic entity, immensely powerful and unspeakably evil.

The haunting began in 1984, after the Moffitts had hired a caretaker for their ailing grandmother, Dominica Cuccia. Desperate to keep the old woman alive, the caretaker secretly performed an ancient ritual of Santeria, intended for healing but instead opening the door between worlds.

Soon after Dominica's passing, harmless but inexplicable things began to happen around the Moffitt residence: Nicknacks were moved from their proper places; possessions from strangers, like wallets and personal items, started appearing around their home; and an unsettling presence seemed to occupy the household. Over the next few months, these supernatural phenomenon only grew in frequency and intensity. In 1987, the Moffitts ultimately made the decision to move away, hoping to leave these otherworldly occurrences behind them. For a time, they settled into a welcomed but short-lived peace.

A few weeks later, those same phenomena that had plagued them not long ago resumed within their new home. Again, various items were being moved or went missing, religious statues and icons were destroyed, and the house was being torn apart but now, their tormentor was communicating to them. The entity began writing on the bathroom mirror, scribing messages on the bathroom mirror with soap, demanding blood sacrifices and promising utter destruction. Above all else, the entity finally made his dark intentions clear: his target was Lena Moffitt, the daughter of Dominica Cuccia, and he had come to claim her soul.

What had started as innocent but unnerving household happenings had escalated into a deadly haunting. Unable to escape and isolated from friends and family, the Moffitts found themselves locked in a spiritual battle to maintain their sanity and their lives.

At last, the frightening reality of this true and terrifying haunting can finally be told.