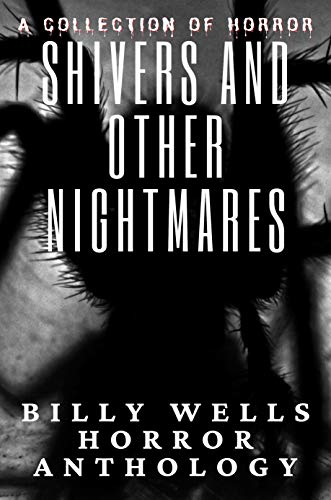 Book: Shivers and other nightmares (Chamber of Horror Series) by Billy Wells

about this book: Shivers and other Nightmares is a collection of thirty short stories in the horror/thriller genre. As I have said previously, after reading a story written by Ray Bradbury entitled The October Game, I was inspired to write horror stories myself. I became an avid reader and quickly became a fan of Stephen King, Dean Koontz, H.P. Lovecraft, Robert Bloch, and Richard Matheson etc. I also watched most of the horror movies on the big and small screen whether good or bad. As you are painfully aware, the majority was bad.

I always enjoyed short horror stories more than a novel because I found most novels were bloated with unnecessary pages in order to satisfy the criteria of being a novel to begin with. These tomes usually included watered down plots with a lot of characters, subplots and back stories around one main theme. I also found many of the endings less than compelling as if the author knew he had enough pages for a novel and simply ended it.

When I searched for a book of short stories with a real plot and a real ending, they were few and far between. So, I thought I'd write a book of stories I would like.

I had already included all the stories I had written in my life in my first book, Black AS Night; Consequently, I started Shivers and Other Nightmares as a new document in Word with a blank first page. I was a member of several writing groups at the time and needed something to read each week. I also needed about thirty stories for my second book. I assumed when I started I would probably devote about a year to the project.

Where did the ideas come from? The answer is all of the above, Plots come from everywhere. Someone coins a phrase in general conversation. Something in a TV show provides the seed. Something you see in the paper or on a sign while driving down the highway. Everything you see and do can be the catalyst for a story.

For example, I stopped at a rest stop on my way to Florida after dark. It was relatively well lit, but it was late. There was no one else around as I headed to the men's room situated in a shadowy alcove. I thought to myself, "What if there is a deranged maniac waiting for me with a butcher knife in one of the stalls? What if he wants my thumb to complete his collection and bludgeons me into unconsciousness with a crowbar when I step inside. After slicing off my thumb, what if he drags me to his car when no one is looking and hauls me away to his farm a mile off the main road. What if he chops up my body, feeds me to the pigs, and sells my car for scrap. Would anyone ever find out what happened to me? Voila! A story for my second book was born!