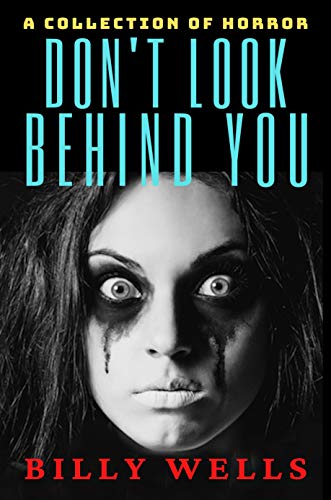 about this book: Tidbits no one else knows about Don't Look Behind You.

My third compilation of scary stories, Don't Look Behind You, took about one year to write. Each story was submitted to a writing group of my peers, read aloud, and critiqued. Afterward, I considered each suggestion the members of the writing group wrote on the hard copy, and made the changes that suited my writing style. The title evolved from a page full of possibilities to fit the cover photo of a psychopathic young woman with black circles under her eyes carrying her dolly and an ice pick. Alternative titles for the seventeen stories included in the book were Show Me Your Claw and I'll…, The Caller From Hell and Other Nightmares, and Something in the House and Other Nightmares.. The main difference between this book and the previous two is the stories are generally longer. Most of the stories were written long hand on a yellow pad in my golf cart, dictated into the Dragon dictation program, and uploaded into Word rather than simply being written on my desktop computer. This new process has yielded more detailed and intricate plots. Unfortunately, the subsequent editing process is still as maddening and time consuming as always. The stories in my upcoming book "Scary Stories" are on average even longer than the ones in Don't Look Behind You.

In the third grade, I was captivated by cliffhanger, adventure serials on TV. At the end of each episode, the hero faced certain death, but the next week, you found out how he escaped from a fall from a cliff or an exploding mine shaft. It was at that time, I started writing my own six-chapter adventure serials. Whenever I finished one, I let the little freckle-faced boy who sat in front of me read it. He liked my stories and, consequently, because he caused me to think I had a talent for writing, I have been writing ever since. I often wonder what would have happened if his critiques were unfavorable.

Later as a teenager, I read a story entitled The October Game by Ray Bradbury in an Alfred Hitchcock anthology paperback. That story not only chilled me to the bone, but it inspired me to write horror stories of my own. I submitted one of my early stories, Black As Night, to my high school English teacher. Knowing she hated scary stories and would be grading it for the next day's class at night, I included the following note at the end of the story for additional effect, "Now, Mrs. Tisinger, as you sit streaking my paper with scarlet, someone could be watching you through the window. Are you alone?"

From those humble beginnings, I have written almost 100 short stories, mostly in horror genre with surprise endings. I have self-published three compilations entitled Black as Night, Shivers and Other Nightmares, and Don't Look Behind You-A Collection of Horror, and I'm about to publish Scary Stories. My first book, Black As Night, includes an edited version of the story I submitted to Mrs. Tisinger by the same name.

I have seen more movies than anyone I have personally known and enjoy most genres, but a good horror film has always been my favorite. Like Stephen King says when asked what horrible event warped him to such a degree he was doomed to write scary stories, I can honestly say, I had a happy childhood, and I simply enjoy writing horror stories more than, for example, romance or historical fiction. In fact, there does not have to be an underlying reason to write horror. After all, some people like chocolate ice cream; I prefer vanilla.

As I review the stories in each of my four books, I feel each one has stories I am proud of. I believe I am a better writer today than when I first started, but in terms of the plots, I cannot pick one book over another. One reviewer said that what she liked most about Don't Look Behind You was that each story was not like any other. I take that as a complement, and I believe each book is like that.

I am a Stephen King wannabe, and I often say in my promotional ad writing as an attention grabber that my goal is to surpass the King of Horror in total books sold by the end of the year. I also bemoan the fact that Steve has a 35-year head start on me, and one of his books has more pages than all of my books put together. In reality, I am a dedicated Stephen King fan and have read the majority of his books. While I like some of them better than I like others, in my view, when he is good; there is no one better.

My dream would be to see some of the stories in my books become a movie or a TV show like the majority of Stephen King's work.

Video: Don't Look Behind You by Billy Wells