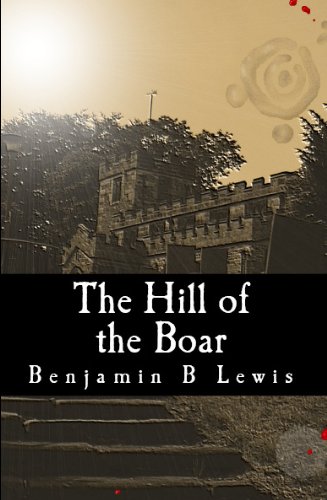 Book: The Hill of the Boar (The Seven Seals) by Benjamin B Lewis

about this book: A series of murders, an insane serial killer on the loose, a whole town going crazy and the night-terrors of two small children are all linked. Will DI Bill Clements be able to work out what that link is?
An ancient church in the village of Pentrich harbours a horrifying secret: a portal between worlds controlled by a demon named Amobus and it's opening.
Serial killer John Cain is controlled by the irresistible demonic influence of Amobus to spill blood and irrevocably open the deadly Portal, turning the nearby town of Ripley into a deadly battleground.
Using a key recovered from the Australian Outback, Father Guiesspe D'Anato and members of The Order embark upon a deadly adventure deep below Rome. But who in the Vatican betrayed them to the deadly Heltzer Corporation?
Back in Ripley, with his rational mind and his whole belief system being stretched to its limits will Bill be able to figure out what he needs to do to save humanity?
With his unlikely companions: an eccentric elderly lady Annabel Cavendish, attractive local GP Dr Caitlin Hughes and a lawyer from Surrey, Steve Morris; Bill must stop the growing evil. Our heroes team up with Giuesspe, who survived a deadly chase across England. A living Warlock named Shallaman Matarak joins them to attempt to save the world from a demonic invasion.
Together they must protect the children, overcome dangers including a corrupt policeman turned crazed killer and a creature called the Boar and use an ancient artefact to save the world. But with the escalating threats to each of their lives will they be able to pull together and save the world?
And just why are these events of such interest to a professor of archaeology and MI5? And just what lies in a cavern deep below the limestone of Derbyshire?