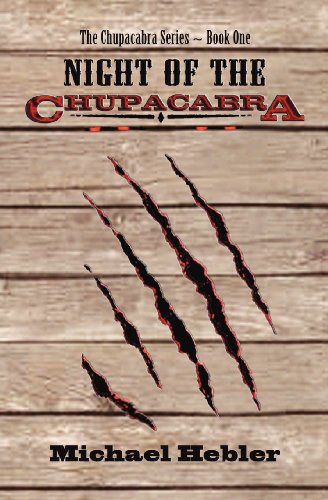 Book: Night of the Chupacabra (Chupacabra Series) by Michael Hebler

about this book: Night of the Chupacabra is more than the title suggests. The first book in this five-part series, that will stretch from the Old West to the 1980's, is not only about a blood-draining beast, but a desperate man's search for his missing family that takes him to a town laden with secrets, deceit, and an answer to a question he never knew to ask. The elusive creature based on the Latin-born el Chupacabra has recently been made famous by reports in the Western United States.

The word "Chupacabra" literally translates to "goat sucker" and is known to not only feed on livestock but the weak and young. It will also do anything to protect itself. Night of the Chupacabra is not only a dark thriller with graphic moments, but a tale of lost love set against a Western backdrop. This novel is intended for mature young adult readers and up. Book Two, Curse of the Chupacabra, is scheduled for release on September 10, 2013.

Video: Night of the Chupacabra (Chupacabra Series) by Michael Hebler