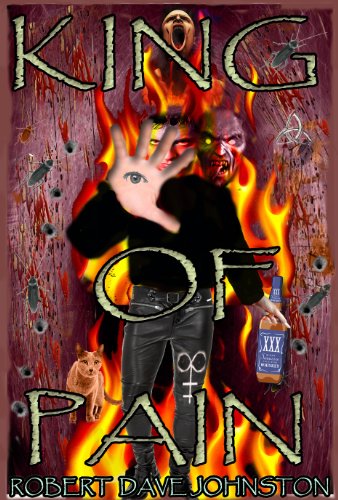 Book Review: The King of Pain - A Journey to Hell & Back Through The Mind's Eye (The Descent) by Robert Dave Johnston

about this book: The King of Pain - A Journey to Hell & Back Through The Mind's Eye is the story of physical and invisible torment; hell on earth and hell inside the soul; hell imagined and hell beckoned into reality by the force of nihilistic hatred. This volume introduces a nameless, faceless character that calls himself The King of Pain. Comfortable in the horrid hideout known as Hell House, we see that he's trapped in a deadly web of self destruction at the hands of what he calls life-juice, powders and pebbles, the latter consumed via a crystal pipe he refers to as 'The Lady.'

While initially he feels sly and in control, the lifestyle of debauchery pricks his soul with relentless waves of guilt, remorse, shame and, bubbling up to the surface, rage. And rage is the powerful 'soul fuel' that he uses to create 'theories' and visions of evil, murder and madness unspeakable. Always in the company of his Russian Blue cat 'Uncle Joey,' he travels through the dregs of humanity and finds solace in all that is filthy and deplorable; the junkie ecosystem, a throng of parasitical life forms feeding off of each other in Building #1, the abode of a certain old man named Ralphy that everyone calls The Cockroach Prince.

As the maze of characters gets more dangerous and some seek to destroy him, there are players behind the scenes that still believe he can overcome, including his eccentric mother Marina, an unknown yet benevolent ghost and Father Corbin, an unconventional priest with unique spiritual abilities and insight. But time is running out. As the character's self destruction breeds more intense psychological suffering, the visions turn darker and more sinister; demonic apparitions begin to appear in his Mind's Eye as well as in his tangible reality.

He is thus catapulted into the very center of his existence where he comes face to face with the ultimate archenemy.

The idea for this series comes from observing all of the external wars and mayhem that we see around the world. And while those conflicts are loud, bloody and visible to all, another silent battle, one of possibly eternal significance, occurs in the hearts and minds of those who live in quiet desperation. There are no human laws to enforce the bloodshed that takes place in the Mind's Eye, yet it is there that the real battle for individuals and the human race at large truly originates.

The hardest part of writing this volume was becoming absorbed by this character and feeling his twisted thoughts, feelings and ideas pulsating through my veins; being attacked by the Four Horsemen of Fear, Doubt, Self-Pity and Unbelief, which told me to burn this trash and forget about ever trying to finish it. Those nights, at the twilight hours, when everyone sleeps yet I sat here awake staring at the screen in fear and loneliness, those were the seeds that created the essence of the story. I think there is a large group of horror readers thirsting for new avenues, not just more zombies, vampires and serial killers. And I feel this book offers that, in spades.

The Road to Self Destruction Leads to Evil, Madnes and Horrors Unspeakable

What I like about this book is that it presents a fresh perspective on horror, demons and ax murderers. Since most of the pot occurs in the character's mind, it is hard to know if what happened really happened or was only a projection of his twisted mind. I like that; it keeps the story interesting and not predictable at all. Sure, there is a lot of disturbing stuff here, blood and gore and graphic description of some pretty horrible places. It's really a great story. I look forward to reading volume 2. This is the kind of horror that I truly enjoy. Thank you! [by David]