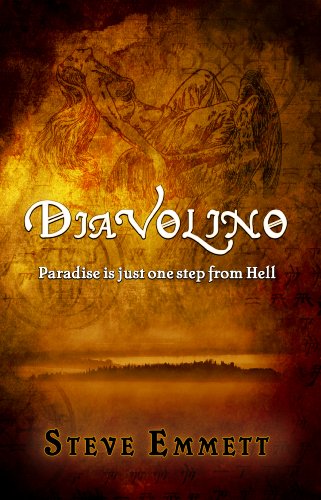 about this book: Diavolino is a fast-paced horror story about good and evil, drawing on the very relevant themes of tolerance and prejudice.

Steve Emmett's background encompasses architecture and Hammer Horror films, so it's probably no surprise to learn that his writing is influenced by Gothic elements. Add to that the fact that he grew up under a heavy Catholic influence and you can begin to understand the roots of his acclaimed novel, Diavolino.

Set in Italy, where Steve used to live, the story sets the beauty of the surroundings against the ugliness of pure evil. Contrasts, Steve says, are essential to good horror. Diavolino begins with a short and mysterious prologue that sets the scene for later events. The story is delivered in very much a cinematic way with scenes of different lengths that cut between the various peculiar characters and the action. And there is plenty of action as architect Tom Lupton and his family get caught up in the cadaverous Monsignor Clavelli's devilish plot.

Steve's interest in the ancient world and mysticism provides useful and intriguing elements, giving this thoroughly contemporary horror a sense of pedigree. Many reviewers have remarked on the way Diavolino feels much like a cross-over of Stephen King and Dan Brown.

Currently working on novels three and four, Steve is also putting the final touches to his second horror – something quite different from Diavolino.