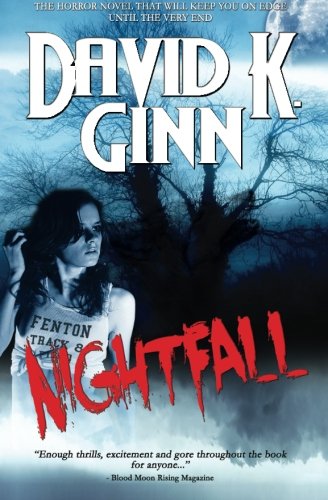 about this book: She's run away from her dreams, and into a waking nightmare.

Every day Dawn McKenzie is haunted by visions of a boy she once knew, a boy who killed himself over a year ago. She moves to quiet Forest Falls, Ohio, hoping to start over and leave her problems behind.

But Forest Falls holds a nightmare all its own: a deadly secret that most have forgotten and the rest wish they had. Something is waiting, hiding in the shadows, jaws ready to snatch away its next victim and drag it deep within the nearby forest.

Dawn's visions lead her closer to the town, entangling her in a decades-old mystery being covered up by an aging sheriff and others she might never know. As the town is put in jeopardy, Dawn and her new friends wait for the shadows to come to life... when night falls.

NIGHTFALL came about because I was lamenting the loss of the psychological monster tale. Books like 'Salem's Lot should be hitting the shelves one after another, but somehow they've drifted into obscurity. The setting of a small town is not obsolete, and neither are the "classic" monsters, like vampires and werewolves. They can be scary again, if the author knows what was scary about them to begin with. Not fangs or hair or claws, and certainly not a charming smile and killer abs. NIGHTFALL is an attempt to recapture the fear of monsters and entangle it with the fears of a young girl taking leaps into adulthood.

The book is as much a feminist tale as it is a horror novel, and as much a horror novel as it is a suspenseful thriller. I spent time in all-girl college dorms for over three months, observing their interactions and getting a feel for what college life was like for girls on their own for the first time. A lot of the characters in NIGHTFALL are inspired by the combined traits and behaviors of the girls I spent time with. The end result is drama that is more manic than melodramatic; it represents the confusion, the desires, and most of all the strengths of the main female characters.

If I could say anything to my readers, it's this: read with a passion for being scared, and a desire to care about characters of all types, good and bad. There's no Team Jacob from this point on. The monsters and the heroes in this book are tortured souls, in one way or another.