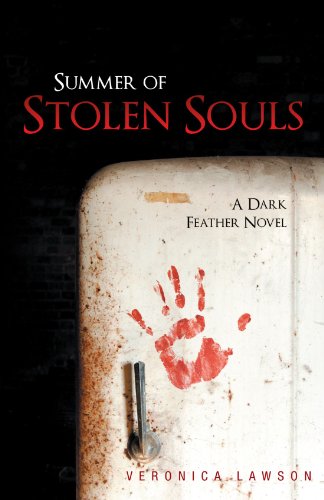 about this book: Ardent readers of horror describe "Summer of Stolen Souls – A Dark Feather Novel" as being a cross between Tony Hillerman's mystical southwest and Stephen King's earlier writings about supernatural. The novel tells the tale of an eccentric old, Ute medicine man's emotional anguish in his struggle to appease Rainbow Spirit, the omnipresent spirit of all things. Robert Caddarown, otherwise known as Old Bob, is the shaman predestined to bring an ancient prophecy to fruition, but, in doing so, must knowingly allow harm to befall the innocent.

The prophecy foretells that in the year 2000, a vile shapeshifter, named Nyatt, will escape from an evil portal hidden in the Utah Uinta Mountains. Skinwalkers feed him human souls, giving him the power he needs to escape his rocky confinement.

Old Bob must convince his grandson to prepare for an Indian warrior's battle against Nyatt. Unfortunately, his grandson openly disrespects him as a grandfather and resists the traditional ways of the Ute tribe. His grandson has three friends—all are white—a gay biologist, an Iraqi veteran suffering from PTSD, and a female bar owner. It is also their destiny to help destroy Nyatt, but persuading them is difficult. With the help of Coyote, Old Bob's animal spirit guide, he manipulates the soon-to-be-warriors in a web of mystical events, which eventually settles the matter.

The veil between reality and the supernatural is the width of a fly's hair. I believe, as do the Native Americans, that everything has a soul. Everything on this earth, indeed, the whole universe, is connected. I believe there was a time when all human beings had the "gift" and communicated with the universe in a personal manner. We understood our connection and responsibilities.

Regarding the birth of the novel, in the beginning, there was a thought that whirled around in my head like a hot summer dust devil. It was a noisy thing and disrupted my day and night dreams. By winter's eve of the year 2011, the thought had transformed into murky images of people. Some were Native Americans. Some were not, but I was certain I knew them. They spoke to me with dull voices that pulsated against my throat. I could not speak for them, but I could feel their souls. Old Bob, Coyote, Manny, Jerry Cloud, Bonnie. All of them had something to say. There was no choice—I had to write a novel about them. Cavuto and a couple of others came out of nowhere, but added immensely to the story.

Even though I was an avid fiction reader, I was oblivious to the art of authoring a novel. As an engineering process manager, I wrote reams of technical material through the years, so I had forgotten how arduous creative writing could be. The rules are different. Writing a procedure or white paper on changing a nuclear facility system is one thing, assembling rambling bits of ideas about people and places into sustainable thoughts—then into a living story is quite another. Rule number one is switch from left side of brain to right side and stay there! After a brutal months of writing and rewriting and rewriting, I completed the almost, final manuscript in April of 2012. After the final editorial evaluation and copy editing, I could not wait to present my novel to horror and mythology enthusiasts.

To describe my research is somewhat complicated. My mother told me I had the "sight" when I was very young. In time, I realized the sight would dominate how I communicated with the world around me. Being of Blackfoot heritage was supposed to have had something to do with the gift. The lineage came down through my mother's side of the family. Moving to Utah in 1966 was a blessing, because it brought me closer to those who believed as I did—the Ute people. When I was younger, all of my artwork was focused on Native Americans, their culture, their faces—every part of their lives. I missed being around the Utes, when I left Utah. The world was naked without them.

Given the fact that I loved Native American tradition, I kept a healthy personal library. When the time came to write the novel, I accessed the Internet's bottomless wealth of information about such things as what geological event formed the Uinta Mountains and what the inside of a mental institution might look like. I also interviewed police officers and individuals that had experiences with skinwalkers. All of the locations, described in the book are real, and I made frequent trips to them, especially Randlett Butte. It renewed my soul to sit below its magnificent cliffs. It continues to do so.

I wanted the novel's cover to have a powerful, subconscious affect on potential readers, one that screamed out above the others, "open me—see what is inside." At the onset of this endeavor, I was fixated with using an eerie, green door on the cover. There is an important, mysterious green door in the plot, but I could not find a photograph of the door I saw in my mind's eye.

It is amazing how the characters will take over and control your thoughts when you least expect it. One evening, I heard a loud pop. The scene where the antagonist, Jerry Cloud, finally relinquishes his sanity to Nyatt's power came to mind. I saw him slamming the door of the old refrigerator with his bloody hand. Bingo! That was it! Without any difficulty, I found two perfect photographs in stock photos. The final image captured exactly what I wanted. The sight of a bloody handprint on a nasty, old refrigerator is disturbing but forces the brain to contemplate what might be inside it. Is the reader's curiosity titillated? I think so. It is surprising how many readers have told me the cover shocked them but "compelled" them to reach for the book and open it!

I seriously entertained using the title "Nyatt's Revenge – The Reluctant Warriors." I ultimately decided the title was wrong. It only reflected a story of an evil "something" and a ragtag band of warriors, but several interesting characters live within the novel's pages and the plot is rich with human interactions. The characters run the gamut of being evil, good-hearted, sad, insane, quirky, clumsy, mystical, powerful, and dead. There are law enforcement officers, a Wicca priestess, a small town newspaper reporter, Indian elders, a junkyard owner, an outfitter, an oil tycoon, engaging animal spirits, and good and bad portals. All of the character's lives are touched, one-way or the other, by the vicious skinwalkers.

I needed a title that alluded to the human crisis unfolding in the novel. I eventually determined the words "stolen souls" gave credence to what the characters were trying to save; "summer" was the critical timeframe for them to win or lose their battle—thus, Summer of Stolen Souls.

I added the subtitle, "A Dark Feather Novel" because this novel is the first of a series. I am currently working on the manuscript for the next book. It involves an old Indian legend—the waterbabies. They are nasty creatures that live in water and will drown you or tear your face off before you can scream. Many of the same characters will be facing these creatures in the next book.

Writing the novel would certainly have been easier had I realized the characters would literally become a part of my life. They lived in my heart and were inside my head every day and night. I actually cried when two of them died. I told them I was sorry, but perhaps they would come back in another book. Strange. Do not think for a moment that I occasionally wondered if I was losing my mind. I felt much better when I realized other authors had similar experiences.

There were many challenges in developing the plot. Was a particular description too much or not enough? Was the pacing too slow or too fast? Getting over the use of passive sentences was a nightmare. It finally dawned on me to write the words, as I thought them. Get them out of my head; then, go back and scrutinize what I had written. This was a long, arduous process. I had already decided professionals should evaluate and edit the novel, but I needed it to be as good as

I could possibly make it. I owed it to my readers and myself.

Writing is emotionally draining and can be physically exhausting. The world you are creating takes precedence over the real one. On the one hand, time means nothing, but on the other, it is like a humming bird. It is there for a few seconds, then it is gone—the day has flown by and so will the night. There are errands to run. The dog, bless her heart, needs attention, but an event in your head is playing itself out; you cannot stop!

It is surprising the number of non-Indians that believe in Native American legends, which have managed to transcend the ages through word of mouth. Some of the non-Indians, when they realized I was writing about skinwalkers, wanted to relate their personal experiences. I used some of those events in the book. Some of these individuals expressed concern about my safety, because of the subject matter I chose. I assured them I knew what not to do. Understanding skinwalkers have been around for millennia, I put my own personal spin on the creatures. I gave them their due.

I hope readers of "Summer of Stolen Souls" enter the realm of the skinwalkers and the Ute Nation with curiosity and leave with the understanding there is more to this world than what we see. Some good. Some evil. When they reach the last page, if the readers do not want the novel to be finished, then I have done what I intended.