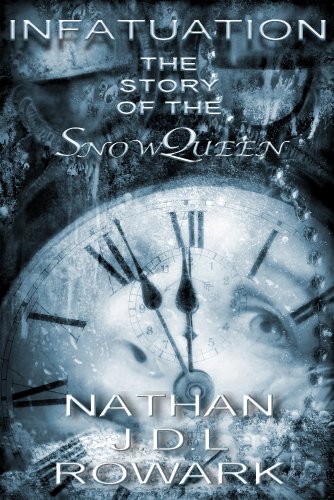 Book: Infatuation - The Story of the Snow Queen by Nathan J.D.L. Rowark

about this book: Infatuation - The Story of the Snow Queen, is based on a concept by Hans Christian Andersen. I love the way he used to play with metamorphosis, and would swap his character's roles.

I had an idea for a story set in the future, that involved social networking. At first you may think my own ideas, and the story of the Snow Queen are quite distant. I started to look at what it would be like for her, the solitude she would have to endure in the wilderness. I realised she had a need to connect, that had to be fulfilled. I also thought about our society as it stands now, our attitudes to faith, and our genders no longer tightly assigned.

My tale takes some of the elements of HCA story and reinterprets them. We start in the prim and proper world of a teenage Kay & Grace, working in the Garden of Remembrance to keep a roof over their heads. As the tale progresses, they have to shed what they were brought up to believe. They are on a journey to rediscover God, as much as they are to reach their goals. This reflects HCA need for faith in his work. I also feel I took his love of change to new extremes, those dying in the story being reborn into another's body.

When I read the piece back to myself, I tried to assess it against contemporary works. The nearest thing I can see is it's Twilight, based on HCA, The Snow Queen, as if written by David Cronenberg, Clive Barker, and Terry Gilliam, on a drunken week in Switzerland.

I would class it as Bizarro, a fairytale, horror, science fiction, and a paranormal romance. There are moments of eroticism in there as well.

I hope this helps, and that you decide to take Eternity for a spin.

Not sure what I mean, hopefully you will soon :-)