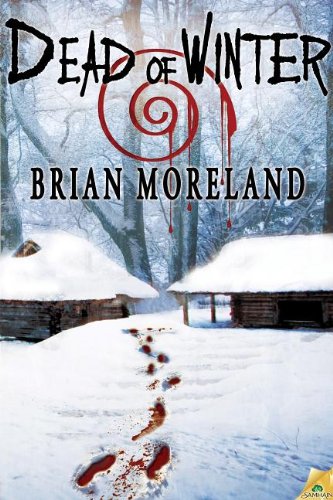 about this book: DEAD OF WINTER is my second novel, which released in January of 2012. It's a historical horror novel set in the Canadian wilderness in 1870. It's based on a real Native Canadian legend and true events of a plague of cannibalism that overtook a fort back in the 1700s. I wrote this to be a detective mystery, Gothic horror story, historical novel, and a love story. DEAD OF WINTER has received excellent reviews and has been compared to The Exorcist, Silence of the Lambs, and the movie Ravenous. I'm very proud to share this novel with fans of horror and supernatural thrillers. Here is a description:

A predator stalks the frozen woods.

At a fort deep in the Ontario wilderness, a ghastly predator is attacking colonists and spreading a gruesome plague—his victims turn into ravenous cannibals with an unending hunger for human flesh. Inspector Tom Hatcher has faced a madman before, when he tracked down Montreal's infamous Cannery Cannibal. But can even he stop the slaughter this time?

In Montreal exorcist Father Xavier visits an asylum where the Cannery Cannibal is imprisoned. But the killer who murdered thirteen women is more than just a madman who craves human meat. He is possessed by a shape-shifting demon. Inspector Hatcher and Father Xavier must unravel a mystery that has spanned centuries and confront a predator that has turned the frozen woods into a killing ground where evil has come to feed.

• "Dead of Winter by Brian Moreland is an exceptionally well crafted horror novel that tells a gripping story of dark religious doings, a horrific serial killer, and a sympathetic Inspector, in a dark and fascinating historical setting of 19th century Canada. Highly recommended." — Douglas Preston, co-author of The Monster of Florence and Cold Vengeance

• "Dead of Winter is a thrilling, wholly-engrossing read that masterfully crosses multiple genres and leaves the reader breathless." — Brian Keene, best-selling author of The Last Zombie and Ghoul