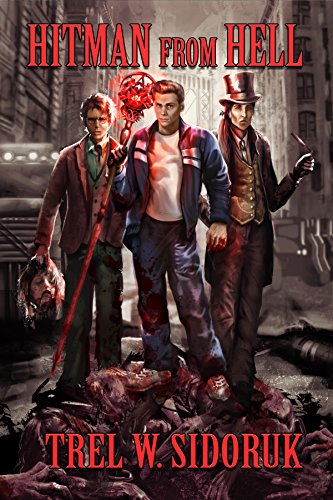 about this book: Hitman from Hell was written as a movie for a real mobster. Ex-mobster to be more specific. He'd recently reinvented himself as an actor of low budget indie flics and was looking for a vehicle to help launch his budding film career. Becoming board performing supporting roles and cameos, he wanted a script that would not only feature him, but empower him. In addition to wanting to take the leap to center stage, he had two wannabe producers vying for his services.

One wanted him in a mob movie and the other, a horror. When he came to me, he asked me to write both, but I had no time for more free words, so I said I would write him one. When we couldn't decide in which direction to go, I split the difference, writing him a mob/horror movie. I'm not sure if I started the genre, but I had never heard of one before I wrote it.

When the two producers faded to black and I was left with a screenplay without a cast and crew, I decided to make it into a book. What I thought was going to be a couple months worth of relaxing revision, turned into a yearlong transformation.

The book is disturbing to say the least. Funny – wickedly so – but make no mistake, this book is off the hook. The characters for the most part (accept three of them) possess zero redeeming qualities. To drive that point home more succinctly, the Devil is in the book and he's not the most disturbing character in the book. At one point, he's like, "I got to get the Hell out of here!" Follow me?

I've spent a lot of time in the Bronx and I believe I represented it well. Hitman from Hell is a quick, sick read that will leave you laughing out loud and then later, questioning why you laughed. You'll want to recommend this book to your friends and coworkers, but you'll most likely not even admit to anyone that you've read it, out of fear people will judge you. And make no mistake - they will judge you… and then secretly read and love the book as well.

The book read like a cross between Reservoir Dogs and Evil Dead. It was authentic Bronx and true to the unabashed attitude that makes the Bronx one of the best places on the planet to live, work and play! To be honest, the writer is a little creepy, but funny nonetheless. [by RTW]