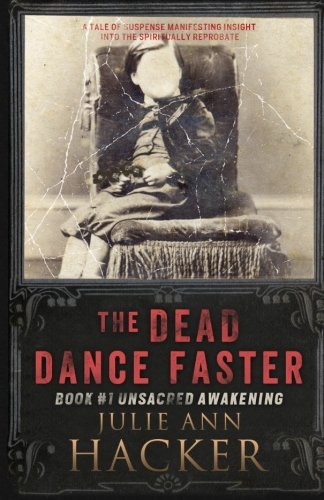 Through no fault of her own, the hard-edged, not-easily-manipulated protagonist, Jael Mancuso, finds herself embroiled within this spiritually reprobate community. By birth, their dogma became her inheritance bequeathed to her by her ancestors and continued through her mother, Annalise.

Our First Church sits at Seven Hills' edge, with antagonist Thomas Jude at the helm waiting for Jael to acquiesce to his hidden agenda of twisted, maniacal maneuvering—actions that will send everyone to another level of this system's staunchly-held, pious commandments. Join Jael and Jude's gnarly crew as they travail this worldly push and pull between reality and awakening.

What are readers saying about this 5-STAR rated novel:

• "Now I just have to wait on pins and needles for the next installment."

• "It has all the ingredients to become a best-seller, and I look forward to reading more."

I was inspired to write book #1 in this series, Unsacred Awakening, after observing, over a period of twenty years, what I personally deemed as crazy, dogmatic, and rigid religious traps that entangled unsuspecting and innocent people. The lengths of control became tiring and sub-consciously rude to my own psyche during the time I worked in this arena, to the point I had no choice but to write about, in a fictional way, of course, the trappings and fallout to which it can lead.

The Dead Dance Faster series was born. The books in this series really stand as experiential experiments to help release the frustration of any cult-like trapping in which anyone may be caught—not necessarily religious in nature, but in any way. At times, the writing became dark as I penned this piece and still does as I continue to write the series. On other occasions, I find myself laughing. But most of the time while writing I say to myself, "Maybe in some way this will entertain and help another person at the same time."