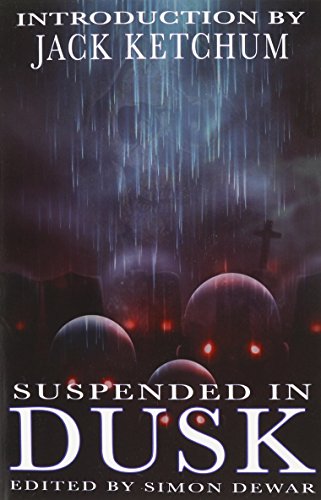 about this anthology: A horror anthology with stories by Rayne Hall, Ramsey Campbell, Alan Baxter, Wendy Hammer and others. Edited by Simon Dewar.

Here's an excerpt from the story 'Burning' by Rayne Hall.

Supper was bangers and mash with mushy peas. Mum had promised me the glossy calendar photo for November - lambs frolicking around Camber Castle - but only if I ate up every meal this month. I disliked greasy bangers, I despised mash, and I hated mushy peas, but I wanted that picture, and it was only the ninth. Half-listening to my parents grown-up talk about the need for a new church, I stirred the peas into the mash. Instead of becoming more appetising, the meal now looked like a vomit puddle around dog turds.

Pa's knife sliced a banger; fat spurted. His face shone with enjoyment. My brother Darren stuffed his mouth with mushy peas and smiled as if he liked the taste, which I knew he didn't. I wondered if Mum had promised him the picture, too.

Mum patted her freshly permed hair. "It's almost night." She stood up to pull the kitchen curtains against the approaching darkness, the way she always did during supper. This time she paused. "There's a lot of smoke. It looks like something's burning down by the old harbour. It glows. Holy Mother of Jesus, something's burning proper. It could be the Eversons' shop."

Standing on my toes, I peered out of the window. My breath fogged the cold glass. With the sleeve of my jumper, I wiped a patch clear, saw dark smoke spiralling toward the empty sky. A light glowed a half-mile from our house, like an orange-coloured glimpse of hell.

Pa put his fork down. "I'll go down the road and watch."

"Is it wise to get involved with this?" Uncertainty quavered in Mum's voice.

"I'm not involved." He stood up and took his grey hat and winter coat from the clothes hook on the door.

"Can I come?" Darren asked through a mouth full of blackened sauerkraut. "I've finished my supper."

Pa was already tying a grey shawl around his neck. "Yes, you can come, son." He paused, pointing his chin at me. "I'll take the girl, too."

Frightened by what I'd seen out of the window, I tried to protest. "I don't want to go. Please..."

An angry glance from Pa shut me up. His hard hand pulled me away from the table. "You'll come."

Within moments, Mum had bundled me into my anorak, a thick knitted shawl and a woollen hat. "Stay with Pa, don't catch a cold, and don't talk to anyone."

Darren grabbed his superman jacket and cap and ran down the stairs, and I followed. At least I had escaped from the mushy peas.

Pa forced me into the black metal seat on the bar of his bicycle, so that I was locked between his body, his arms and the handlebar. At seven, I was really too old to travel in the child seat, but he seemed to like holding me captive, and I did not dare suggest I ride behind him on the luggage rack. Darren followed on his own bike.

A few minutes later, we reached the blaze, and faced it from the safety of the pavement opposite. My heartbeat roared in my ears like a locomotive. The fire was real in its frightful intensity. Thick smoke oozed through the roof and curled into grey spark-loaded columns. Hot stink wafted in our faces.

"Smells like we're burning garbage," said a woman with silver spectacles and wrinkly skin. Others laughed; their laughter sounded eerie against the whine from the fire.

Many people had come to watch the house burn. Onlookers stood in small clusters, their hands in their pockets, their faces muffled with shawls.

My mouth was dry and tense; cold prickled on my skin, and I put my hand into my father's coat pocket to hold his hand. "I want to go home, Pa. Please."

"Watch." He grabbed my shoulders and turned me towards the fire. "Watch and learn. Learn about what happens to garbage."

I tried hard not to look, but the glow drew and held me. I knew the house: The shop on the ground floor sold magazines, lottery tickets, ice cream, my favourite Werther's toffee sweets and Mum's cans of mushy peas. Above the shop was a flat, and above that, an attic under a gabled roof.

The façade looked thin and vulnerable. The upper windows contained dark emptiness, and the bow windows of the shop screamed with orange heat. Everything looked black against this orange. The house reminded me of the lanterns we'd been making at school, black cardboard with rectangular cut-outs, with brightly coloured translucent paper behind.

I didn't mind the rows of mushy peas cans burning, but I regretted the Werther's toffee and the ice cream chest.

"Are they in there?" a young woman asked in a thin voice. She carried a small white dog in her arms and stroked it incessantly. She tilted her head at my father. "The Eversons and the Arabs aren't still in there, are they?"

"I've only just arrived. I know nothing."

"If they were at home, they'd have come out by now, wouldn't they?"

When he gave no reply, she turned to the tall bespectacled woman. "The fire fighters are taking their time, aren't they?" She stepped from one foot to the other, either nervous or cold. "They've been notified, haven't they?"

"Yes," the other woman said.

"Well, they're volunteers, I suppose they can't be expected..."

The sea breeze whipped the flames into further frenzy. In the distance, seagulls screeched.

"I don't know anything, so don't ask." The older woman turned away. The younger one stopped talking, and pressed her face into her dog's coat.

Not everyone was quiet, though. Darren had met up with other boys from his class. They hurled stones at the windows of the upper stories, smashing the panes the fire hadn't reached yet, chanting something about cleaning up the town. Their teacher stood by, and I expected him to call the boys to order, but held his hands folded behind his back and watched.

Within moments, the sash windows of the upstairs flat lit up at once like a garland of festive lights. Glass crackled and tinkled, a beautiful chiming sound, dotted with poufs and bangs. The smoke grew darker and thicker, turning dirty brown and charcoal black. Plaster blistered and peeled off the wall. Embers flew.

Wind blasted from the site and threw furious heat at us. My face felt like a roasting sausage, but when I averted it, the icy night air made my hair stand up.

Sirens howled, the dog yapped, and people made room on the pavement for a shiny police car. Two uniformed policemen jumped out and shooed people back from the site, including the chanting boys. Then they stood, inactive, hypnotised like the rest of us.

Now smoke seeped from the small attic window, then it lit up as if someone had switched on a hundred lights behind a red curtain. A collective "Aah," rose from the crowd. A couple of people started to clap, but stopped when a policeman threw them a stern look.

I wasn't sure what it all meant. I couldn't believe that people were trapped inside this boiling heat. I scanned the crowd for the woman with the white dog, but she had disappeared, so I asked the woman with the spectacles. "Are there people in the fire? Are they burning?"

"Of course not, dearie," she soothed. "The Eversons are away on holiday. They had a sign in the window, 'Closed until Monday 11th'. And even if there was someone in there, they wouldn't feel a thing. The smoke would get them first. So don't you fret." She fished in her coat pocket. "Here, have a sweet, dearie." I hesitated, because my parents warned me not to take sweets from strangers, but Pa had laughed with this woman, so maybe she wasn't a stranger, and it was a Werther's toffee.

Fearing to offend by refusing, I croaked a thank-you from my dry throat and took the sweet, but put it into my pocket.

Now a red fire engine pulled up with blue flaring lights. Dogs and sirens howled. While the fire fighters opened the hydrant and connected their thick limp hose, the burning house roared like an angry animal. The night sky now appeared deep blue, cool and clean.

I heard one fireman question a group of men. "Anyone still in there?"

"Don't think so. The Eversons own the shop and live in the flat above; they're away on holiday."

"There won't be much left of their shop and their flat when they come back."

In the meantime, two fire fighters with helmets had rammed the door and gone in, but came out within moments, signalling with large arm gestures.

The fireman standing near us translated. "The staircase has collapsed. Nothing we can do."

Flames leaped high in the air, glowing orange and yellow, red and lilac, and it was the most beautiful and most horrible sight I had ever beheld. In the midst of the tumult, I heard screams from the fire.

Around me, people mumbled and shuffled their feet.

"It's the wood," someone said. "The fire has reached the ceiling beams." Another voice replied, "That's right. Old wood always sounds like that when it burns."