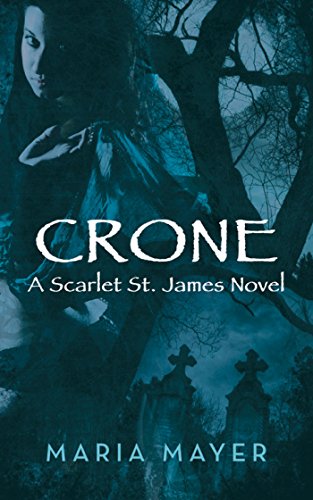 about this book: CRONE was inspired in part by on a terrible decades old urban legend of a vengeful, savage witch who hunts and kills with unimaginable speed and ferocity from her forbidden territory in the woods. She needs nothing more than to have your scent, and after hearing her warning taps of three you're dead.

The story took on a life of its own as I recalled my own experiences and sitting in story circles around a campfire just outside the oldest, creepiest cemetery in town with childhood friends roasting marshmallows while scaring each other with recounted stories and tales of sworn encounters with the horrible one in the woods. Researching the ancient Arabic language used in the dialogue between the witch and her razor sharp demon opponent as well as Wiccan theology and practices, dark spells and rituals, and factual religiously significant events around the world helped to shape the characters and formed a relevant basis for the plot.

Drawing on personal encounters with demonic entities and spirits before the era of paranormal investigation teams, EVP Monitors, infra-red lenses, and other fancy thermal imaging and recording devices we relied upon gut instinct, crude recording equipment, and a firm belief in a higher power for strength. The book is geared toward adult readers sixteen and up who understand the concept of separating fact from fiction and that this is still ultimately a product of my imagination. Real life events and humor were woven in to curtail the story from becoming far too dark and sinister, as I am a firm believer in the old saying that truth is often times far more interesting than fiction.

Be the critic. It is far more valuable to me as a new author to received honest feedback to better understand what works with readers and what does not. It is my hope that readers enjoy the book as much as I enjoyed taking nearly one year to write it.