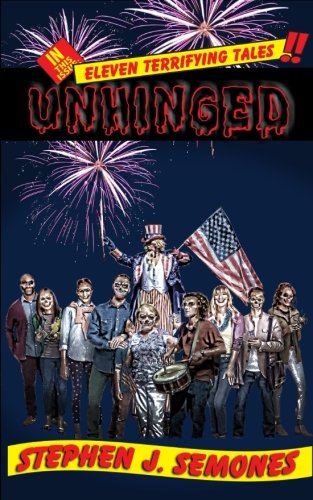 about this book: Unhinged is about turmoil, the death that unsuspectingly creeps up on us while we are distracted. When I set out to write Unhinged, I wanted to tell an anthology story like those I grew up watching. Inspired by the storytelling methods of Creepshow, Tales from the Crypt, The Twilight Zone, Tales from the Darkside, and many more; Unhinged is literary tip of the hat to those classic films and television shows.

I wanted Unhinged to be several short stories, all loosely tying together by one common thread. I decided the glue binding the stories would be the fictitious Washington town of Falls Gap. It's in that Americana- that typical American town, I wanted to weave a horrific story. By taking a town, distracted by the Fourth of July weekend, I was able to dissect the facade', the layers beneath the superficial surface. It was in those layers that I found the true horror I wanted to tell. From an overprotective mother to an alcoholic business owner, I was able to tap into the seedy dark-side hiding just beneath the surface of society.

Taking a different approach than I normally do when I write, I wanted to tell the stories out of order, each one weaving in and out of one another and cemented together by one seemingly harmless holiday weekend. This out of sequence storytelling method I developed for Unhinged was literally the hardest experience I've ever had writing. At times I wanted to give up or restructure the book. I'm glad I didn't and kept moving forward. The closer I got to the ending, the worse I felt about the book. Once I had all of the stories in place, I began moving them around, refitting them into what I felt was a better pacing, a better telling of the story. After a few edits, I had my book. Now, I'm very proud of the book and the second-guessing I did was just fear. I was uncomfortable writing in the style I chose. I learned more writing this book than any previous. I learned to go with what felt best and not second-guess myself. Unhinged was a great learning experience and one, as I look back, I would do over again.