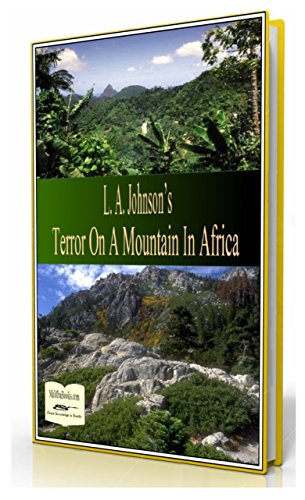 Book: Terror On A Mountain In Africa by Liberty Dendron

about this book: Its a screenplay. An exciting thrilling screen Play. Terror On A Mountain In Africa ... The screen play begins describing the showing of footage from some of the many nuclear tests that were carried out by the U.S. government in the mountains of Africa. The government had ordered the local residents to move to keep them from getting hurt by the atomic tests. Some of the residents (miners) refused to leave their homes, and were exposed to dangerous levels of radiation. The natives went into the caves to survive, but their newborn children were genetically altered. The children are now adults, and to survive in the jungle, they murder and rob traveler passing through the jungle. They are not only insane murderers, they have become blood-thirsty cannibals. The Johnson family has traveled from Virginia to Africa. They have rented a car and trailer to tour the countryside. The tire on the automobile explodes, creating an accident in the jungle, they become the next victims. An indescribable nightmare begins when the Johnson's are stranded on an isolated jungle road deep in the African jungle, with no hope of rescue. Desperate and fearing for their lives, horror surges as they find themselves relentlessly pursued by a force of evil beyond their imagination. This blood-curling epic is a shock-a-minute horror that will make you turn the pages for more. Romance Suspense Thriller A smash-hit written with the visual effects of a movie. Prepare yourself for an exciting ride, you will enjoy it.

An indescribable nightmare begins when the Johnson's are stranded on an isolated jungle road in African. Desperate and fearing for their lives, they find themselves pursued by evil beyond their imagination. A blood-curling shock-a-minute horror.