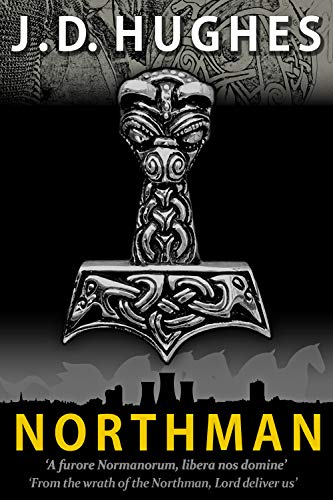 about this book: It's out. Lock up your souls. Make it a big lock.

NORTHMAN is a historical, supernatural thriller. There is mystery, horror, a frantic pursuit, a timeless love and an ancient evil from before the dawn of time bent upon the destruction of humanity. Two damaged people stand between it and its goal. Ultimate conflict. And perhaps ultimate sacrifice.

As one reviewer puts it "Some very unexpected events and twists will leave you wondering just what is really happening and how in the hell it will all end up. Or perhaps whereabouts in hell."

NORTHMAN is about the nature of reality, the persistence of evil and the survival of love. The story moves from 9th century England, through 1942 and into the present day of Repton, England, Chicago, USA and Madrid, Spain. Or does it?

The book took 18 months to write, but I wrote a first draft in 1995. The title, NORTHMAN, is a term for a Viking pirate, many of whom raided the British Isles from around 700 AD. The book cover features an amulet worn by the leader of our Viking raiders, Thorkild. It is a pagan 'Thor's Hammer' of which there were many designs until the Vikings were fully converted to Christianity from the 10th to the 11th century.

"I struggled to put it down. Highly recommended… "

The hardest part of writing the book was the amount and degree of violence, both psychological and physical, I needed to describe to carry the story forward truthfully. The Vikings were known to spare no mercy towards their opponents, but rather gave them respect if they were worthy adversaries by killing them quickly. A little like Star Trek Klingons! But not all were killers.

NORTHMAN is set mainly in the present day where evil, in all its guises, similarly uses absolute violence to achieve its aims, but with little respect.

"You'll get attached to the characters and follow them into the madness hoping they'll survive."

I hope that readers will enjoy the twists and turns of the plot and fight with our heroes - Kate, Michael, Doctor Weatherall, Captain Peterson, Maria Ramirez and Martin against the evil of the NORTHMAN. And I defy anyone to guess the last few pages, without looking at them first!

"When you look long into an abyss, the abyss also looks into you." - Nietzsche. Don't read NORTHMAN for too long.

*FREE CHAPTERS ARE AVAILABLE ON MY BLOG*