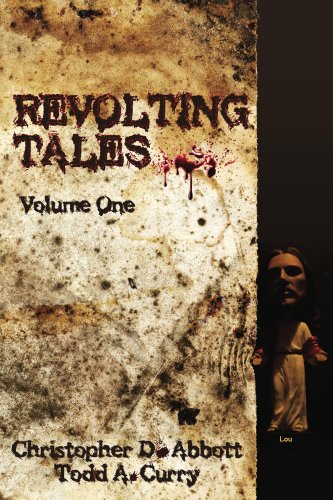 about this book: This book is a series of short horror tales, in episodic format, written as though they were for television. It is co-authored by Christopher D. Abbott (me) and Todd A. Curry. Todd had never published anything before but like many writers, had plenty of stories to tell. His "off the wall" view of life, from his experiences in the military and law enforcement, coupled well with my ability to set things out on paper. I'd never written anything horror related before I met Todd, so whilst this is the first book Todd has published, this is also a first for me!

This book will appeal to anyone who enjoys the macabre side of story-telling, or simply likes reading grotesque, gruesome and horrific tales!

The cover was designed by Richard Sutton, an amazing artist who took the premise of the revolting side of our work, and came up with a grotesque cover to match it. It really is amazing.

The premiss is simply tales of retribution. People who live their lives so badly, you almost look forward to their punishment. "Lou" is the Devil, but not like any devil we've seen before.

Deep in the very depths of Hell, where billions of souls are eternally enslaved in perpetual torment, you'll find Lou, the master of the underworld.

Meeting Lou for the first time, in an endless assortment of hideous and ridiculous clothing, you'd be forgiven for thinking he was almost benign. Don't be fooled though, he takes his job very seriously. So seriously, in fact, that when Ethan, Miles, Marco, Sal, Tommy, and an assortment of other damned souls pop up on his radar, he along with Sandra, formulates a wickedly gruesome set of punishments. There's blood, gore, guts, logging saws, and puss - lots of puss - a river of it in fact.

Lou - timeless and ageless, his excitement and attention to detail immeasurable, takes the greatest pride with some very naughty people. Lou believes his personal attention should be considered an honour…

We sincerely hope you enjoy this book! It isn't meant to offend. It's also isn't, I might add, for Children!