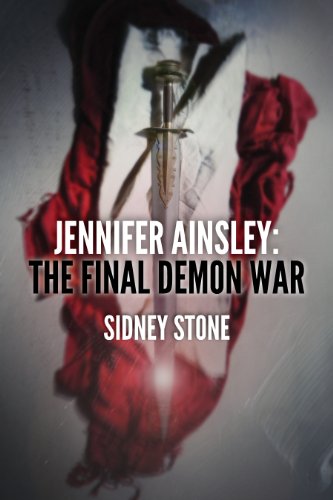 about this book: Jennifer Ainsley: The Final Demon War is a contemporary tale that is a gripping, fast-paced fantasy/horror novel grounded in the modern world but starting at the beginning of time. The book deftly tackles issues of greed, humanity's neglect for its weakest members, the race for power among individuals and nations, and the ability of love and courage to transcend personal weaknesses. The characters are extremely likable and engaging, and I successfully incorporate a great deal of humor into the book, despite its often grim and macabre themes.

The book details the struggle between humanity and demons who have forsaken the Underworld to live among men while plotting to use our own technology to destroy us. The demons are fallen angels who have been in existence since the beginning of time worshiping and admiring God and his creations but were then cast out as they continually destroyed nascent worlds out of petty jealousy. They are mortal now but blessed with supernatural powers and extraordinary long life. They can also give this life to others who out of power and greed work with the demons to undermine our civilization.

Jennifer Ainsley is the adopted daughter of billionaire Jonathon Tait. Jonathon has visions that Jennifer may be the only person who can wield the one weapon that can redeem us: The Sword of Jesus ("Do not suppose that I have come to bring peace to the earth. I did not come to bring peace, but a sword"

- Matthew 10:34). As Jonathon Tait states: "Some people misinterpret that as allegory. Some people reject his message and react violently. He was really saying that he indeed brought a motherfucking sword—the Sword of Jesus."

Jennifer is trained unknowingly with the skills to be a warrior until one horrifying night her destiny is thrust upon her. The novel then becomes a thrilling chase until the end as Mankind races to save itself while the demons implement their plan to kill us all.

This story is indeed about love, loss, sacrifice and redemption. It was inspired by my love of the early works of Stephen King and Dean Koontz and was written over the course of almost two years. Copy edited by professionals with an expert cover design Pencilbox Studios, this engrossing story will captivate readers from the mid-teens on up. The plot clips along at a fast pace and is highly original; the action scenes are especially well written and engaging. This is a book destined to find a wider audience.