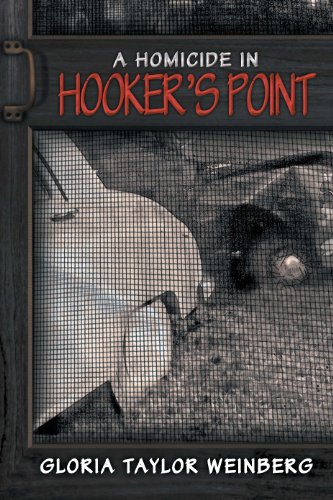 Book: A Homicide In Hooker's Point by Gloria Taylor Weinberg

about this book: A Homicide in Hooker's Point has nothing to do with prostitutes.

It takes its name from the small community south of Clewiston, Florida, where author Gloria Taylor Weinberg grew up, and although Clewiston is billed as "The Sweetest Town in America" for its sugar production, the novel is anything but sweet.

While there are passages of exquisite tenderness and even humor, Hooker's Point centers on a homicide, and it deals with tough issues: child molestation, animal cruelty and domestic violence–some of the things that are part of the day-to-day life of eight-year-old Victoria Leigh Bayle.

Vicki is the precocious only child of Frank and Rena Bayle, who move to Hooker's Point when Vicki is five. Over the next three years, Vicki loses much of her innocence but not her spirit.

In 1950, she is staggered by the death of her beloved grandfather. Then, in one traumatic weekend, neighbor Eric Magruder kills her kitten; she is beaten for the first time by her father; and she watches while Magruder is gunned down in her driveway by his father-in-law, Randolph Dyer.

A dozen people witness the shooting–and the wreck that precedes it when Magruder rams Dyer's truck with his own in an attempt to kill his wife.

The question is whether Dyer was the only shooter.

When Frank Bayle found out on Saturday that Magruder threw Vicki's kitten through a screen door, he followed Magruder to town and beat him up. Vicki told a friend that day that she hoped Eric would die.

On Sunday, Frank and Vicki were on the Bayles' front porch throughout the violent confrontation between their next-door neighbor and Dyer.

They also both had access to Frank's gun, and Vicki knew how to use it.

Investigators want to know what made the small hole in the Bayles' front screen door, which they photograph but do not take into evidence before it is cut out and replaced by Frank.

Why is he refusing to answer questions about the shooting, and why won't he produce his handgun?

The grand jury called to rule on whether Dyer should be charged with a crime or not is peopled with memorable characters whose decision was preordained: justifiable homicide.

But did they have all the facts?

At least one investigator thinks not, and the reader is left to wonder:

A Homicide in Hooker's Point won a 2011 literary award from the Florida Writers Association.