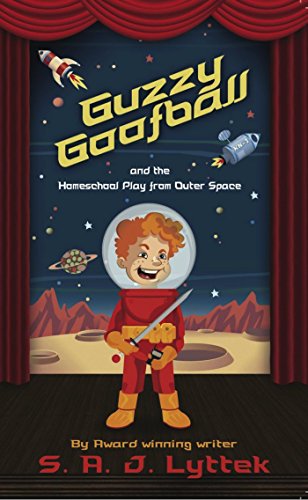 Book: Guzzy Goofball and the Homeschool Play from Outer Space by S. A. J. Lyttek

about this book: Why did I write a misadventure about a boy named Guzzy? A gazillion reasons probably, but here are some of the most basic:

1) I knew many Guzzy-like guys. Ten is a problematic age. You're not yet to teen, but no longer a little kid. Throw being homeschooled and toddler siblings into the mix and you definitely don't feel 'normal' whatever that may mean.

2) Homeschooled kids are real. Therefore, they need and deserve their own real stories. Guzzy's adventures could happen. Many of the details actually have happened, but like an old TV show said, 'the names have been changed to protect the innocent'.

3) Homeschooled guys need representation. The overwhelming percentage of books with homeschooled characters focus more on girls than boys. As a mother of two grown sons that I homeschooled, I'd like to make up some of the lack they experienced when trying to find books.

4) The kids I wrote this for, homeschoolers, love it. And kids who aren't homeschooled like the glimpse of the lives of the kids down the street or in their Sunday School class.

• My favorite part was when his younger brothers wanted to help him paint the stage set. Guzzy ends up in a huge mess. — Daniel, 7

• It was telling the life of a homeschooled boy and what his adventures were and it connected with me. — Rosie, 14

• One of my favorite scenes in the book is when Guzzy describes his younger brothers demolishing his Lego castle. — Ethan, 12

• Jakey and Jonny: Genius! They were my favorite characters by far, what with all their paint splashing, tower crashing, fist fighting, screaming, and shenanigans. — Eli, 14.