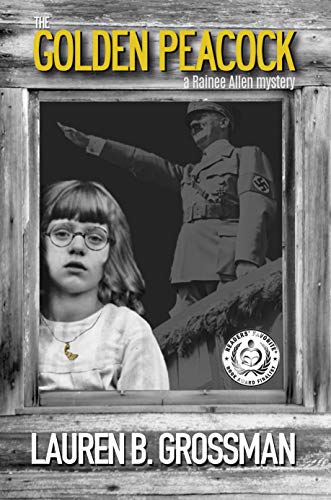 about this book: Combine a mystery, the Holocaust, a love story, an unexpected kinship between women of two generations, and the result is this poignant novel, THE GOLDEN PEACOCK.

Successful author, Rainee Allen, is experiencing writer's block. Rummaging through her desk, she comes across a souvenir she had received years before at the U.S. Holocaust Museum; an identification/passport of a survivor. Rainee had kept the souvenir because the survivor's birthday shared her birthday (though 30 years apart). She decides to try to find out more information on this German girl named Jana Lutken.

Realizing she may have an idea for her next novel, she travels to London to begin that research. Eventually, she does find Jana, who suffers from Alzheimer's disease. Rainee develops a relationship with her and finds out more about her past. As she uncovers long-held secrets, Rainee becomes entangled in events that put her in danger and leads her to relationships with two men; the handsome director of Jana’s nursing facility, and the visiting doctor, who mysteriously serves as a trigger causing Jana to relive the horrors of the Holocaust.

Rainee embarks on a dangerous road involving Nazi hunters and Nazi sympathizers. Unsure which ones are following her, Rainee enters a world of mystery and suspense in the back alleys of London.

The juxtaposition of past and present makes for an interesting blend of two stories which seamlessly meld.

The reader will be surprised with the shocking twist that occurs in THE GOLDEN PEACOCK. They’ll never see it coming.

I was hooked from the start ...

I could not put it down and just HAD TO read it to its conclusion ... so many twist and turns to the very end ... Loved it! [by Jo Rosas]