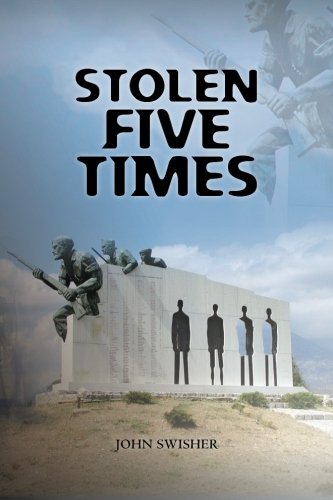 about this book: In Stolen Five Times, a husband and wife on business in Greece go on a dangerous search for a treasure that was originally extorted from Jewish refugees during World War II but was lost during an encounter with the Greek resistance.

When Hitler appointed Max Merten to deport Jews to labor and concentration camps in Greece, Merten collected a fortune in waiver fees from the Jews—and hid over five hundred million dollars worth of treasure for himself. Now, newlyweds James and Angela are in Greece on business when a mysterious fax of Jewish holidays leads them to the awe-inspiring Meteora bluffs. They soon find themselves on the trail of a treasure hidden for almost seventy years. A treasure hunt that may lead to riches—or their ultimate demise.

Two German soldiers steal ten million dollars from Merten's hoard and attempt to escape from Greece but encounter the Greek resistance. James and Angela follow the clues that James is certain will lead to its final resting place. But when attempts are made on James' life, he must go without his blushing bride. He is accompanied instead by a stranger who also knows about a cave where he believes the treasure to be hidden—and where a final showdown will reveal whether James lives…or dies. A thoroughly absorbing and richly woven tapestry of intrigue, death-defying adventure, and steamy romance. Dr. John D. Swisher's follow-up to Two Paths Crossing: Then and Now will leave you breathless as it steamrolls towards its breathtaking conclusion. Systematically developing two plotlines from two different eras, Swisher's skillful melding of historical fiction and a modern adventure-romance is a rare, satisfying combination.