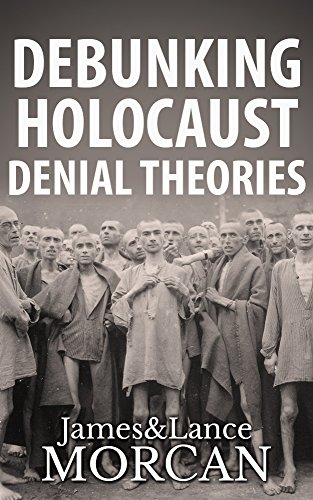 about this book: The alarming global increase in anti-Semitism was, for us, a primary motivation to write 'Debunking Holocaust Denial Theories'. Obviously, it's a book we'd prefer didn't need to be written because the Jewish community has been through all this before. And more than once! (It seems we humans never learn).

Not surprisingly, this book has been targeted by anti-Semites – as you'll see if you check out the reviews on Amazon. Some of these reviewers insist the Holocaust never happened. Some deniers go by the fancy title of "Holocaust revisionists", insisting the number of Jews who died in the Nazi Holocaust was nowhere near the six million figure that mainstream historians unanimously cite. We feel that title is too respectable for them and so simply call them deniers in our book.

One 'leading' denier, who happens to be a prominent UK-based publisher, went so far as to publish a book debunking ours. He titled it 'Fail: Debunking Holocaust Denial Theories' and even used our book's cover image on his cover. Fortunately, Amazon removed his book, but his followers continue to target our book.

That (other) book's cover, and the story around it, features on our blog at Morcan Books and Films.

Fortunately, most reviewers resonate with our book. In one review, Pam Blevins, Regional Museum Educator at United States Holocaust Memorial Museum, describes it as an "excellent book to debunk denial theories".

Ms Blevin's review reads in part: "It is well researched and well thought out… In this well documented book, they (the authors) attack five areas deniers talk about and prove the deniers wrong… They discuss the 6 million number figure that deniers claim is wrong; the gas chamber exterminations that are claimed to be false… They use Nazi documents, survivor accounts, eyewitness accounts, scientific tests and results, and photographs (almost entirely Nazi photographs) to prove their case… The book is a must read for students of the Holocaust and World War II as well as for deniers or those who are conflicted as to the authenticity of the Holocaust."