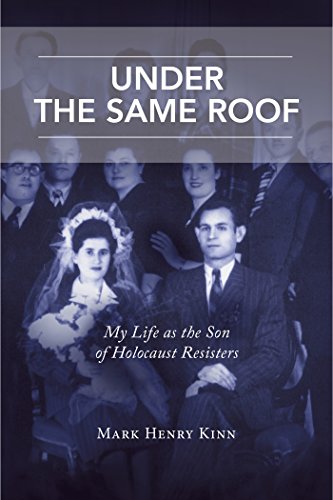 Book: Under the Same Roof - My Life as the Son of Holocaust Resisters by Mark Henry Kinn

about this book: Under The Same Roof is a candid and personal memoir about intergenerational trauma. We are all born into the story created by the history of our parents. Dr. Mark Henry Kinn's childhood was colored by the events of the Holocaust - every decision he made, from childhood forward, from choice of friends to choice of profession, had its roots in the cruelty and loss his parents endured.

Dr. Kinn's parents were both Holocaust survivors. Together they confronted the inhumanity of the Nazis. As resistance fighters, their courage, sacrifice and strength helped them survive. After the war, those same qualities inspired them to protect their children and create a home free of horror and brutality. They did their best to bury their memories and hide the scars of war, both physical and emotional, from their children.

Under The Same Roof follows Dr. Kinn's struggle to honor his heroic parents, while creating his own identity, separate from the legacy he inherited. This book beautifully and subtly demonstrates the effects of unexpressed feelings, memories and trauma and how they weigh so heavily on all involved.

Those who share a legacy of pain and trauma will surely relate to this story, and those who seek to better understand the effects of intergenerational trauma will find a searing and honest account of one man's journey.