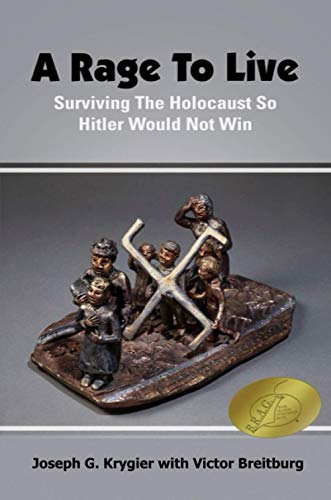 Book Reviews: A Rage to Live - Surviving the Holocaust So Hitler Would Not Win by Victor Breitburg, Joseph G. Krygier

about this book: The Holocaust of WWII affected many lives in many ways. This is the story of one man, his family and some friends. I started the idea with a play about a fictional character, who survives the Holocaust ands becomes a comedian in the Borscht Belt during the 1950's. After doing some research, I discovered some articles written by Victor and decided to write about a real person. I contacted him and shared my idea. During the first week we spent together, he asked if I could help him write a small book for his family. Well, it turned into a much larger project. The sub-title came from a comment made to Victor while he was in Auschwitz-Bierkenau. The title was a deep rooted thought he had during his journey to survive. The cover is part of the way we wanted to present the story of Victor's life. There are other photographs in the book and we have used them to illustrate the narrative.

A Rage to Live

Rage to Live is compelling, passionate tale of a teenaged boy's determination and ingenuity -- an inspiring tale of survival. Once Victor gets to the concentration camp, you simply can't put it down. [by Duane Tucker]

A Story That Needed To Be Told

This is a story that needed to be told, and it needed to be told now. If anything it is understated. The reader comes away feeling, even knowing that Victor has held back at least some of the horror. It is the story of a life, and the perspective is a historical one from the rear-view mirror as it were. There is a reality, an emotive earthiness, and a humanness to the tale of Victor's life that flows from his honesty and openness. I am grateful that my friend Joe Krygier played a role in bringing Victor's life story to publication. Perhaps this will encourage others who also have valuable Holocaust life stories to get them published for posterity. [by John T.]

Video: Interview with Joseph G. Krygier, co-author of A Rage To Live: Surviving The Holocaust So Hitler Would Not Win