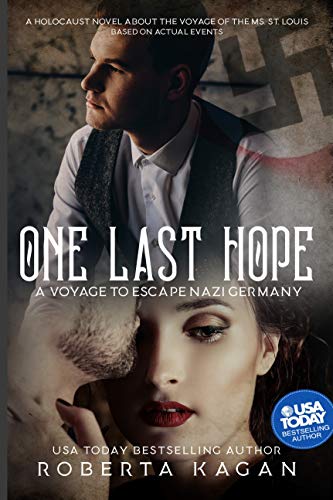 Book: The Voyage - A Historical Novel set during the Holocaust, inspired by real events by Roberta Kagan

about this book: The idea for this novel began when I volunteered at a yearly meeting of Holocaust survivors. It was there that I met someone who had been a passenger on the MS St. Louis. Her story touched me deeply. Then I went to a Holocaust Memorial and met with an amazing man. He too was a survivor of the same ship. The vicious deception by the Nazis in the situation of the MS. St. Louis haunted me. It was then that I knew I had to write The Voyage. Let me begin by giving you a little background. The St. Louis was a luxury cruise ship filled with 937 Jewish passengers that sailed out of Hamburg in 1939. Passage was expensive, but Hitler promised to allow the St. Louis to leave Germany safely. People sold everything they had just to be able to afford to put one of their children on board. The ship was bound for Cuba. However, the entire voyage was a cruel Nazi trick. Hitler never meant to let the Jews on board that ship find peace and freedom. Unbeknownst the poor souls on their way to Cuba, as soon as the ship left the harbor in Germany, Dr. Goebbels, Hitler's Minister of Propaganda contacted Cuba and convinced the Cuban government not to allow the ship's passengers entrance into their country. The captain of the St. Louis (who was a good person and a hero) refused to put his passengers in danger by taking the ship back to Germany. He made contact with every country possible begging them to help the Jews on board the ST.Louis, including the United States but no country would allow the Jewish passengers in. My novel "The Voyage," is the story of five young people who boarded the MS St. Louis in Hamburg in hopes of escaping the horrors that awaited them in Nazi Germany. It is a tale of deception, betrayals, friendship, and love. But most of all it is the story of five people bound together forever by a secret they shared on The Voyage.