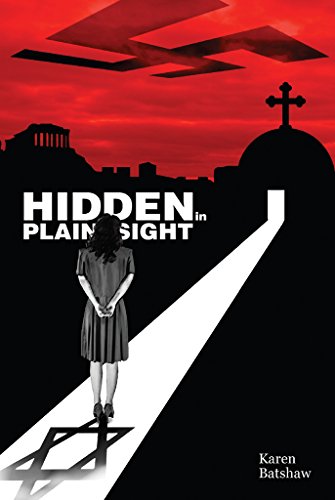 about this book: This novel is about the little known Nazi occupation of Greece. Greece was ravaged by the Germans more than any other country in Europe and very few people know about this. In Athens people were dropping dead in the streets because of famine.

I was inspired to write this book by a chance meeting with a Greek Jewish man who lived in a town in Greece where the Christians saved most of the Jews. I became intrigued and began doing research, reading every book that was written in English on this subject. I researched this topic for more than a year as well as making contact with elderly Greeks who had lived through the war.

Men and women who will be intrigued by this unknown history that is portrayed in a novel.

The cover was designed by a young man with a master's degree in architectural design from Harvard who lives in Greece. He first read the book and then designed the front cover. I asked him to put a tombstone from a desecrated cemetery on the back cover. It is based on a photo that I took when I visited Greece.

The hardest part of writing this book was immersing myself in the horrors of World War II, and having fictional characters talk about their future when I as the writer know many people will not have any future as they will end up at Auschwitz.

I want my readers to know that there were Jews in Greece who had been there for over 2000 years. The clergy in Greece preached to their parishioners that they must hide their Jewish neighbors. I also want them to know that Orthodox Greeks suffered terribly when the Nazis took everything from them, their food, their crops, their means of transportation.