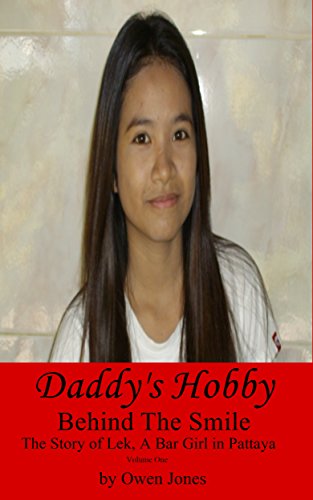 Book: Behind The Smile by Owen Jones

about this book: 'Behind The Smile' is the first book in what will be a trilogy of novels about Lek, a bar girl in Pattaya, Thailand. This first novel is sub-titled 'Daddy's Hobby', which is the name of the bar where she works.

Lek first went to Pattaya looking for a straight job to help pay off the mortgage on the farm, but when she realized that she was pregnant, she also realized that she needed better money, so she had the baby, gave it too her mother to look after and entered the tourism sex industry.

All went well for several years, but she tried hard to leave the industry. As her daughter grew up and she grew older, Lek tried even harder to get out of the job she was in.

'Behind The Smile' traces Lek's struggles from her own point of view, highlighting her hopes, dreams, and disappointments.

'Behind The Smile' is the story of the fictional Lek, but don't think that there are not many girls in the world like Lek.

The author spent many years talking to girls like Lek and felt compelled to combine some of the stories he heard into a novel.

This book will appeal to those who have travelled to Pattaya, Thailand and the Far East in general. It should also be of interest to those who are concerned about the life of young women, sex tourism and prostitution.

The title of the novel derives from the phrase often used to describe Thailand, The Land of Smiles, and the sub-title of this first novel, Daddy's Hobby, used to be the name of a friend's bar in the Netherlands.

Readers of this novel will find it informative as well as entertaining.

• "Behind the smile" is a good read and well worth buying. Guaranteed to help you understand a little of whats going on". — Wayne Darcy.

• "[BTS] gave me a wonderful insight into the Thai bar culture and helped me understand the complex interactions that go on". — Ross

• "[BTS] was well written and it was interesting to learn how other people live. Especially the choices that some have to make in life - makes one think how lucky one is". — Jane

• "Your novel is very well written and I love the story of Lek...she is so brave and I admire her spirit...its hard in life to choose to survive against all odds...to do what you have to do sometimes...she is the voice for so many other young girls who are misunderstood...". — Singing Heart.

Video: Behind The Smile by Owen Jones