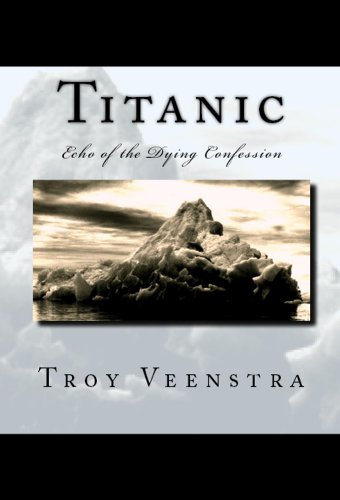 Book: Titanic - Echo of the Dying Confession (the Aroich Saga) by Troy Veenstra

about this book: Since I was a kid and first heard about the sinking of the HMS Titanic I was fascinated by it, even more so when I was told my Great Grandpa Veenstra was supposed to be a passenger on the ship but for some reason came down with a sickness, which only lasted for that day. Odd I know but then again it seems at times the truth is far more surprising than fiction.

Thus, when I got older I researched the ships designs the people that worked on it and dreamt of its potential. In doing the research, I began to see an odd pattern, one that could change the outcome as to what really sank the ship and killed over 1500 people. What I found however, was only enough to cause some pause, but not enough to be proven, and thus I decided to add my own twist to it my creating this book. Showing what could have actually caused the sinking of the ship and the deaths of so many... hard to believe that the act of love can cause such tragedy and yet, the prove lies on the bottom of the Atlantic ocean…

Video: Titanic - Echo of the Dying Confession (the Aroich Saga) by Troy Veenstra