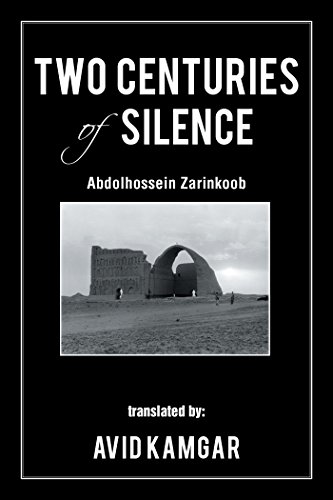 about this book: It was mid-7th century, in the waning days of the Persian Empire, when Muslim Arabs attacked Iran. The Arabs in this crusade were united under Prophet Muhammad's flag and were promised, in addition to heavenly rewards, the prospect of war spoils. Their swift and bewildering victory astonished the world, but was this, sanctioned by the Heavens? Those who believe in an invisible power do not doubt it, but an enquiring minds search for a cause in any effect.

For Iran the Arab victory marked the close of a fascinating and dynamic history spanning the years from 700 BCE to 700 CE for Iran. Then for two centuries, a brutally long, chilling silence cast its shadow over the history and language of Iran.

Historian Zarinkoob explores the reasons behind the Sasanian downfall and the triumph of uncouth Bedouins over an immense and glorious civilization such as that. In addition he answers why during these two centuries Farsi become a "lost" language, obscure and traceless, and why a book that tells the tale of a most turbulent period of Iran's history is "titled Two Centuries of Silence" and not Two Centuries of Chaos and Uproar?

This book, "Do Gharn Sokoot", for the first time presents the viewpoint of an Iranian historian of the Arab invasion of Iran, and is translated from Farsi into English by an Iranian scholar who grasps the author's perspective.

About the Author
Abdolhossein Zarinkoob (1923–1999), born in Borujerd, Iran, was a prominent scholar of Iranian literature, history of literature, and Persian culture and history. He received his PhD from Tehran University in 1955 and held faculty positions in universities in Tehran, India, and Pakistan, and at Oxford University, Sorbonne, and Princeton University. Because of his pioneering works in Iranian literature, literary criticism, and comparative literature, Zarinkoob is considered the father of modern Persian literature. He wrote and researched many aspects of Iranian culture and history and provided his country with precious and important books on a variety of subjects. His solid research works made him a world-class Iranologist and undisputed master of Persian literature and poetry. When asked which of his works he likes the most, he replied, "Two Centuries of Silence."

About the Translator
Born in Shiraz and educated in Iran and the USA, Avid Kamgar earned a BSc degree from the University of Tehran and a PhD from the University of Maryland, both in physics. She served four years on the faculty of the Technical University of Munich in Germany, followed by twenty-five years at Bell-Laboratories in Murray Hill, New Jersey, USA. She performed and conducted leading research in physics, publishing over a hundred papers in scientific journals, international conference proceedings, and books. In 2001 she received the prestigious RTP award from the Institute of Electrical and Electronics Engineers (IEEE) for her pioneering research in silicon processing. Throughout her life and, in particular over, the past two decades, she has been a fervent student of Iranian history. Her research in the Middle East history has been crucial to this translation.