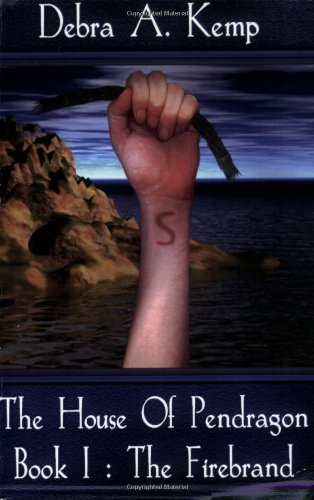 Book: The House Of Pendragon, Book I - The Firebrand by Debra A Kemp

about this book: I write Arthurian fiction because King Arthur commanded me to. I saw the movie, CAMELOT with Richard Harris as a young teenager and was hooked. I also asked myself: What if King Arthur had a daughter? What would she be like? How would she fitinto the basic story? The idea for my main character, Lin ferch Arthur was conceived that very night. She kept me awake trying to work her into the story from the movie. This was in the mid-1970s

It also prompted me to read every book about King Arthur I could find. Hence the beginning of the research and my Arthurian book collection. I knew then I wanted to write my own version of the story, but I also knew I wasn't anywhere near ready to do that. There was a lot I needed to learn, but Lin kept with me and "we" played with various story ideas.

It was not until after I was married and had children and my husband was in the US Air Force and we were living in England that the storyline began to gel. I was out walking the quiet lanes near our home one afternoon, just thinking when I "heard" the voice of a young boy. he was very closely tied to Lin and he wound being the beloved Dafydd, Lin's foster brother.

Things took off then--about 1990. We moved back to the States in 1992 and by 1993 I began writing FIREBRAND from Lin's personal and first person point of view. It was the only one that worked for me. Lin could not grow up in Camelot as the pampered princess. She had to grow up as far from that as possible to make her the way she is. So book one covers her years as a slave to Morgause (Arthur's half-sister) and of Modred Arthur's son). Once the book was finished in 1996, it took another 7 years racking up over 200 rejections until Amber Quill Press said yes to publication. The process took nearly 30 years. Lin's story was worth all that time!