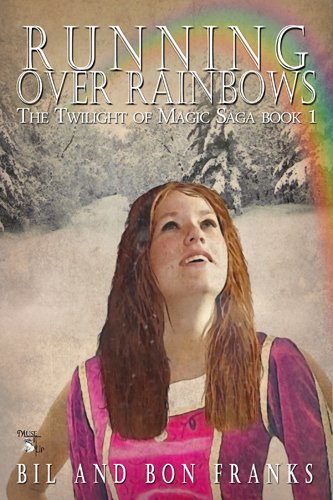 Book: Running Over Rainbows - Book One (The Twilight of Magic Saga) by BilBon Franks

about this book: [tag line] A rebellious teen discovers a unicorn in a magical garden, unaware that the elderly aunt she's butting heads with has already discovered one in her own garden.

RUNNING OVER RAINBOWS is the first of a four-part saga called "Twilight of Magic" that chronicles the life of a young girl named Caylith in the tumultuous days of 429 to 432 AD. These are the days when the Roman armies were retreating en masse from Britannia, when the magical land of Faerie was just beginning to crumble and become the Christianized world of St. Patrick.

The book is written from the point of view of two characters: the cranky tomboy Caylith; and her equally cranky great-aunt Marrie AppleSprout. Both characters are strong, and they butt heads throughout the book. While Caylith is festering inside her elderly aunt's "fusty old manor," the sixty-something Marrie is fostering and even training a sprightly wild mountain pony.

The mischievous teen cannot be held in check for long. She discovers two of her aunt's tightly-guarded secrets. Those secrets, of course, must come out, and therein lies a tale. . . And a unicorn and a wild pony too.

Look for the other three books in the series, to be published every two months from March through July of this year: HIDDEN BY THE ROSE . . . CHILDREN OF THE DUST . . . and WHERE WILD PONIES RAN. Audience: 'tween to teen, and adults into their golden years.