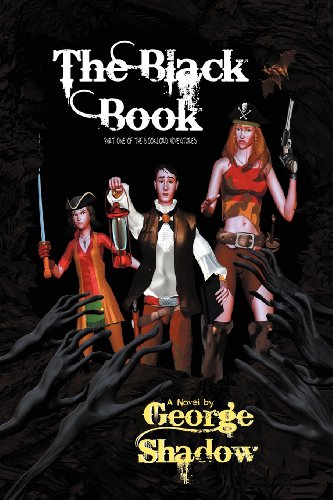 about this book: Book's about a boy who finds an old hardcover up in their attic, not knowing it's an ancient magical weapon until so many things have gone wrong around him. I got my inspiration for writing this story by watching too many Harry Potter, Lord of the Rings, Pirates of the Carribean, Spartan, Roman, and Biblical movies...as well as the History Channel...(laughs). Primary readers of my book are teens and preteens, but then their mums and senior siblings can jump in as well, alongside anyone who is forever young at heart. How long it took me to write? Well, two years or less...I wasn't really timing myself! What, with having so much fun while researching and actually writing the story, time just stood still for me, I guess! Now, coming up with the title was the easiest part of the setup process. Since this magic book punishes anyone by sending him way back in time, I kinda felt it would be a sophisticated black book in modern terms, since everyone knows that a teacher often keeps names of class misfits in a so-called 'black book' for later punishment. This particular book in my story rather does the punishment itself!

I chose the cover because it evokes a sense of unease and impending danger. Here are three kids in a dark cave surrounded by gloomy and unearthly hands. The first question people ask me on seeing the cover is "Whose scary hands are those?" That was the idea behind the cover. To raise questions only the story can best answer. I don't think I came across an easy part while writing this book...(laughs)...most important thing is that it all came out so well in the end ... Of course I did a thorough research for the story...like I earlier said, I am an avid fan of the History Channel...(laughs)...but that wasn't all! A sincere investigation into the Jewish occult or Kabbalah, as well as a good long peek into the life of Emperor Constantine I and all the intrigues that eventually made him the Empire's first christian ruler, will never also suffice. To be blunt, I poured over many ancient scripts and titles many a long night just to make sure my story becomes a very good one. Yes I learnt a lot while writing this story, but the most important lesson was that perseverence pays off sooner than later. Am already putting into the second book in the series (THE WHITE BOOK) all the experience I have gathered from writing this book. Well, my last word to my readers? I really hope they enjoy reading this book as much as I enjoyed writing it! Thanks for your time...I really enjoyed every moment of this chit chat...(laughs)...